Chinese manufacturer, Vivo, is gearing up to unveil its new device, vivo V11 Pro. We already have confirmation that this smartphone will be unveiled on September 6 and will be available for order via Flipkart and Amazon. However, the complete details of this device are still under wraps despite the numerous official teasers released by the company. Today, new renders surfaced online which revealed some salient points of this upcoming smartphone.

This fresh leak is consistent with previous speculations which kinda confirms the specs. Just like other renders, this new render shows the Vivo V11 Pro with an Oppo F9 Pro-like water drop display and it also has an on-screen fingerprint sensor. It is powered by a Qualcomm Snapdragon 660 processor coupled with 6GB of RAM  and not less than 64GB of internal storage. 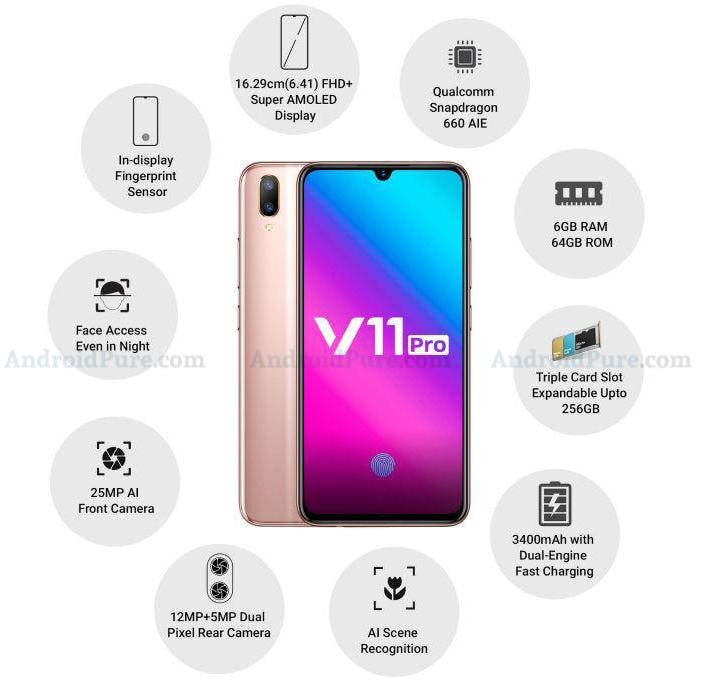 This phone is equipped with a 6.41-inch S-AMOLED display with probably FHD+ display resolution. In the camera department, we clearly see a vertically aligned dual rear camera setup which is believed to be a 12MP + 5MP configuration (supports AI scene recognition) while the front side sports a 25MP shooter for perfect selfies. The lights of this smartphone will be kept on by a 3,400mAh battery with Dual-Engine Fast Charge. Also worthy of note is that this device comes with a microUSB which is quite surprising because of the preponderance of the more advanced USB Type-C port.