The Vivo X23 is all set to be released on September 6, and apparently we’ll have a leak per day until the release. After having its design leaked through a couple of renders and live images, this time we have its official specifications confirmed by a leaked presentation slide. 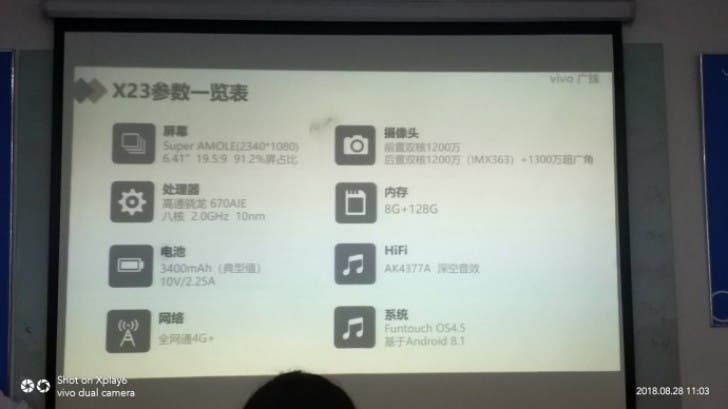 You can judge the reliability of this source, but since it gotten removed shortly after popping out, we have no doubt that this is the closest shot of the real Vivo X23 specifications. On topic of the specifications, the Vivo X23 will feature a 6.41-inch Super AMOLED display with 2340×1080 pixels of resolution and 19:5:9 aspect ratio. The handset features the controversial top-notch, but justifies its existence on the 91% of screen-to-body ratio.

At the helm, we can find the Snapdragon 670 coupled by 8GB of RAM and 128GB of Internal Storage. The smartphone also carries support for 4G+ and carries a 32-bit DAC: the AK4377A from AKM. On the camera department, we can find a 12MP selfie snapper, and a 12MP + 13MP dual rear camera setup. The main sensor is the Sony’s IMX363, present in other smartphone such as Poco F1, Mi Mix 2s and Vivo’s NEX S.

Fueling this package of specs, the smartphone carries a 3,400mAh battery with Android 8.1 Oreo and Vivo’s FunTouch OS 4.5 atop. Although the presence of a under-glass fingerprint is not confirmed by this leak, we already know that it’ll be present. We have six days to run before the official release, let’s keep an eye on the upcoming leaks about Vivo’s newest handset.