A sudden wave has started with rumors and leaks pointing to the Redmi Note 6 Pro announcement. The handset was already teased by the known tipster Roland Quandt, and also received Wi-Fi certification.

The handset could debut alongside the Redmi 6 series – about to be released in India. Today information coming from Weibo suggests that the Redmi Note 6 Pro will feature the Snapdragon 660 and will be released in Xiaomi’s most important market. 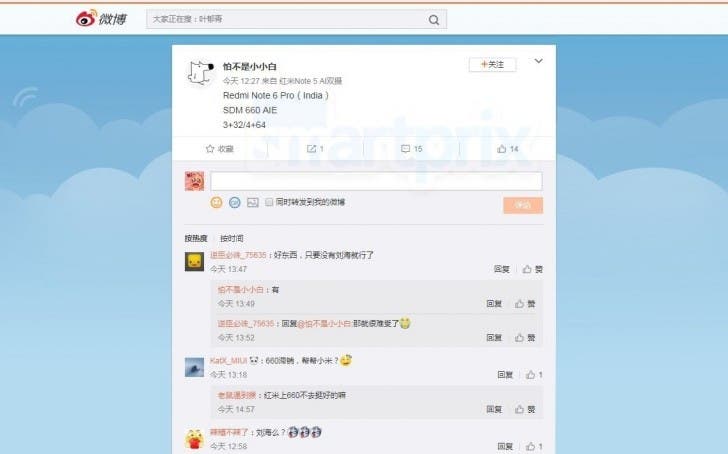 The post was already deleted, and while it should be digested with 2 grains of salt, the idea is plausible. The Redmi Note 5 Pro was released back in February with Snapdragon 636. Despite the good performance of the handset, it still shipped with the old micro USB port. The successor of 5 Pro could come with a superior processor and a newer USB C standard.

The tipster once again confirms the previous reports of two variants of the Redmi Note 6 Pro – with 3GB/32GB and 4GB/64GB. While the Snapdragon 636 is already a good performer, the Snapdragon 660 is better and brings an improved GPU. Last, but not least, the smartphone may also feature a top-notch on the screen, following Mi8 and the Redmi 6 Pro.

Major attention in India was stolen by the Poco F1. But still, if Note 6 Pro becomes the cheapest SD660 device, it could sell like hotcakes.