The development of 5G technology is almost complete and now in a testing stage by potential manufacturers who are scheduled to use this network. Last week, OPPO successfully tested 5G signal on a modified Oppo R15 with Snapdragon X50. Now, another Chinese manufacturer, Xiaomi, has confirmed that it successfully concluded 5G testing. 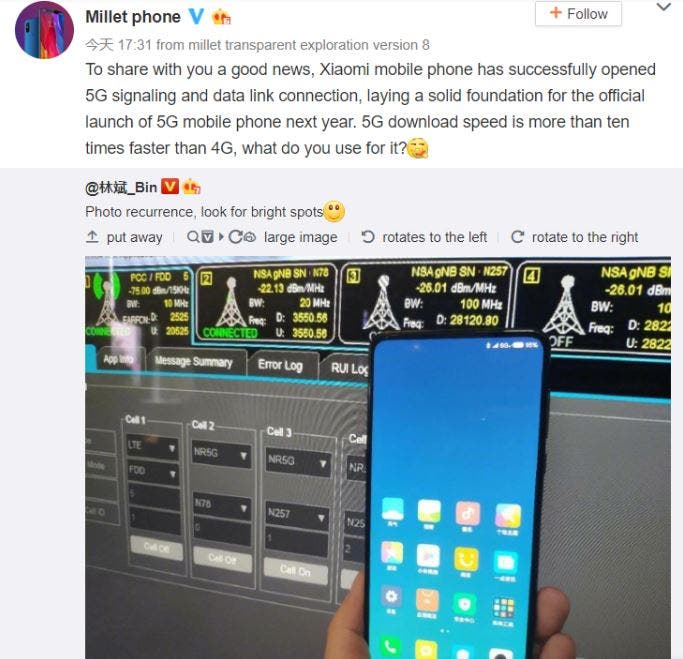 Lin Bin, Xiaomi’s president shared the testing phase on Weibo while Xiaomi’s global spokesman, Donovan Sung also took to his official Twitter handle to announce the same. What caught the eye is the test smartphone – it is the upcoming Xiaomi Mi MIX 3 whose pictures were released by Lin Bin a few days ago.

Sharing one more photo. Does anyone see anything interesting? 😎#Xiaomi pic.twitter.com/LjZGibMsuR

Although this new live image did not show the camera slid-up, the recently leaked video did and it is the same device. The image shows that Xiaomi use the popular 5G band – band N78 (20MHz). According to the Weibo post, the download speed of the 5G network is ten times faster than 4G. This network will make downloads much easier.

Some Online Deals For The Mi MIX 2S

Next Razer's Gaming Phone was a huge success, Razer phone 2 officially in the works