Over the past few months, we have seen quite a lot of rumors pointing to a high-end phone from HMD Global, allegedly dubbed the Nokia 9. More recently, the phone once again surfaced on the web, with the leak suggesting that the alleged Nokia 9 will come with some quite absurd features – particularly a five cameras set up on the back.

Although HMD Global is yet to confirm the existence or not of a Nokia phone with five cameras on the back, the latest scoop from Latvia suggests the official launch of the Nokia 9 might not be too far off. The scoop isn’t coming from HMD Global, nor any other leaker, but from Samsung mobile who is offering up to €292 off your next Galaxy phone purchase if you trade in a yet to be unveiled Nokia flagship. 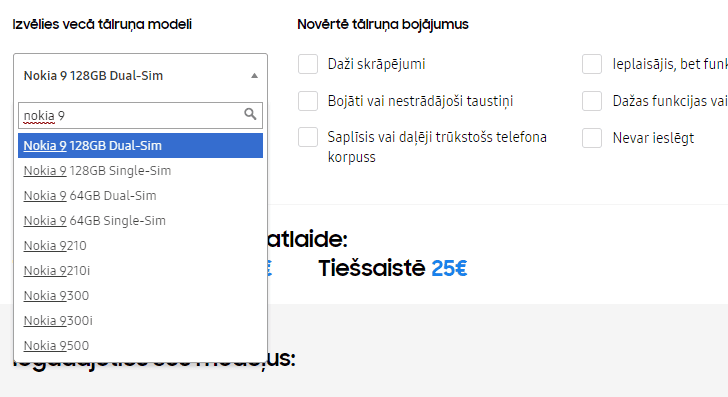 While no further details were provided, the Samsung Latvia buyback page listed the 128GB and 64GB  storage options, in both dual and single SIM. So this is basically a confirmation that the Nokia 9 might come in 2 storage variants, although chances are that a higher variant with 512GB storage might also be in the making.

While this might appear to be an error in the listing, chances are that Samsung mobile might have had a first-hand information on the upcoming Nokia 9, even though the buyback offer appears to early.