Today, Apple opened pre-orders for iPhone XS/XS Max in some countries, The most “cheap” 64GB iPhone XS is priced at $999, and the first batch of users will receive the phones on September 21.

As an important reference factor for purchase, battery life is a topic of concern to consumers. Generally speaking, Apple do not announce the specific battery capacity, which needs to be known after the disassembly of iFixit and other organizations. 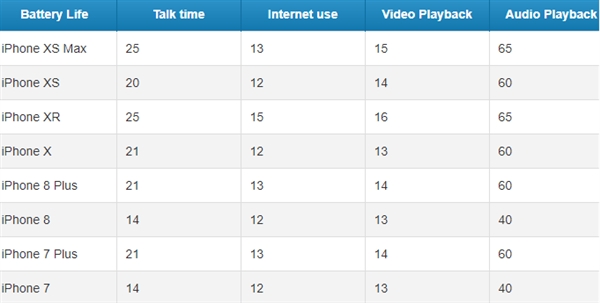 Among 8 iPhone models, the iPhone XR has the best endurance performance and the Internet and video playback are 1 to 2 hours more than the iPhone XS Max.

iPhone XS and last year’s iPhone X battery performance is basically the same, although the call is one hour less but the video can play for an extra hour. Considering that the iPhone XS uses a larger 6.1-inch LCD screen, this is a good result.

Digitimes Research has reported that it is expected the shipments of three new iPhone devices will exceed 85 million units in the second half of 2018.

Next OPPO phones with In-Display Fingerprint Scanner spotted on TENAA