Recently, Chinese manufacturer, Meizu Technology, officially announced that it will hold the Meizu 16X product launch conference at the Beijing Performing Arts Center on September 19th. Today, the company released the Meizu 16X official warm-up poster and it reveals more details of this smartphone – specifically the camera. According to the poster, the Meizu 16X camera will use an IMX380 + IMX350 Sony sensor with ArcSoft algorithm. Presently, this camera configuration is not found in phones with the Meizu 16X price tag. 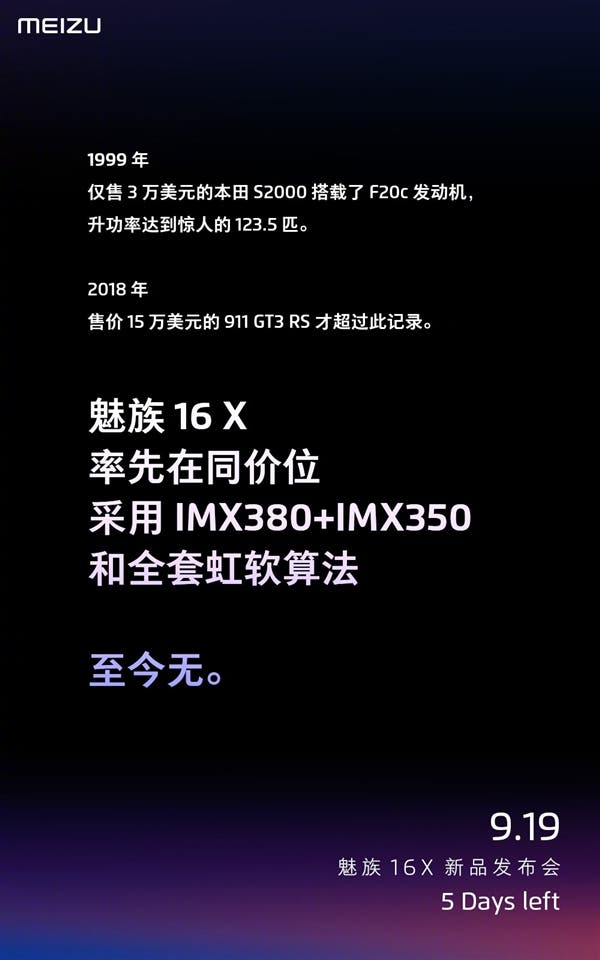 The Meizu 16X will have a huge price advantage, and the camera performance will be on par with flagship phones. According to Huang Zhang, the founder of Meizu Technology, Meizu 16X is equipped with a Snapdragon 710 chip and he labeled this smartphone “the best Snapdragon 710 model.” As far as we know, this device will use a full metal body with hidden antenna design, ring flash layout, and a flagship camera. The colour options will remain matte black, ceramic white and matte gold which is consistent with the Meizu 16 series.

This smartphone will come with a 6.0-inch 18:9 Samsung AMOLED display with a resolution of 2160×1080. The processor will be supported with 6GB of RAM and 64GB of internal storage (we may have an 8GB + 128GB version subsequently). The lights of this smartphone will be kept on by a modest 3100 mAh. The batteries of the Meizu 16 series seem to be quite small and this has been a turn off for some buyers.

Previous Mi A2, POCO F1 (one variant) go on open sale in India