After the eventual official release of Android Pie, quite a few phone makers have started Android Pie beta tests for top-tier smartphones. This includes OnePlus, Huawei, Nokia and a few more. Now, it seems the newly released POCO F1 will soon be added to that list. The most affordable Snapdragon 845 phone was spotted on Geekbench today running Google’s latest OS.

The Geekbench scores of the POCO F1 with Android Pie were certainly lower than the ones tested with Android Oreo for many. This leads us to believe that the handset could be running unfinished software or a beta build right now. That’s likely since almost all OEMs have yet to introduce a stable version of Android Pie yet. However, this Geekbench listing gives us hope that the update is arriving soon. 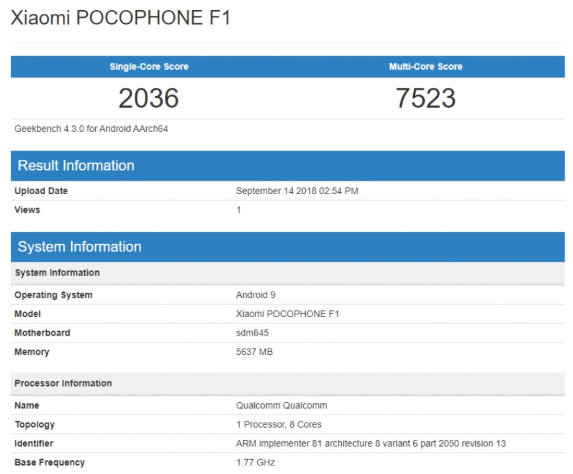 The POCO F1 just went on open sale a day back although this was just for the 6GB +128GB variant in India. Despite being an irresistible deal, the POCO F1 isn’t without its shortcoming. It has faced some nagging hardware issues like screen bleeding and ghosting, some pretty annoying software bugs, some of which were fixed by the company.  It’s still an irresistible device.