The first smartphone to pack a triple-camera setup was launched this year in the form of Huawei’s P20 Pro. The first smartphone to carry a quartet of cameras in the rear will be the Samsung Galaxy A9s, expected to come on October 11. However, Lenovo posted a new teaser indicating the launch of a QuadCamera smartphone, thus meaning that Samsung will not be alone. 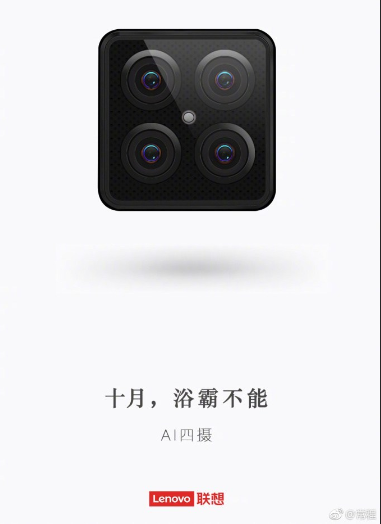 The above image may lift some controversies since it was published by Lenovo’s Vice President Chang Cheng depicting a square-ish quadruple camera sensor. The setup in question is very similar to the one which will debut in the Mate 20, albeit without a LED flash and with an extra sensor.

The above image indicates that Lenovo may have a smartphone to launch with four rear cameras. However, the company’s Vice President has a bad habit of misleading people with his posts. Back in May Mr.Cheng published several teasers indicating that the Lenovo Z5 would be a total bezel-less smartphone, however, when the smartphone arrived, it was a total disappointment due to the presence of a large thin at the bottom and notch on the top.

Considering this information, we advertise you to digest the above picture with a grain or two of salt. If the smartphone is indeed coming, we would suggest next month as a possible release date.