A few months back, Microsoft uncovered the most affordable product in its Surface line, namely the Surface Go. Although this is not an Android Go product as you may think, there is something in common with it – it’s the affordable price tag of $399. And while many customers have been getting acquainted with the new Surface series devices launched yesterday, the EDGE version of the Microsoft Surface Go appeared in the FCC. 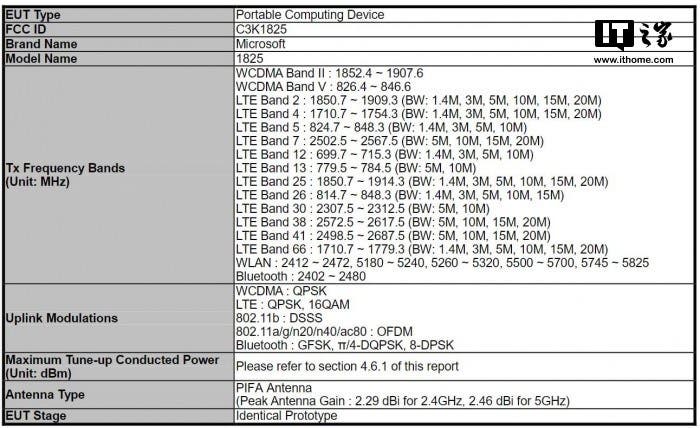 The registration ID of this device in the FCC is C3K1825, and the original WiFi version is C3K1824. As an entry-level Surface hybrid device from Microsoft, at the first launch of Surface Go, it was said this device will have an LTE version. So this is more expected rather than a surprise.

According to the information given by the FCC, the Surface Go LTE version supports 12 frequency bands. However, at present, Microsoft has not announced the specific information of the LTE version of Surface Go. Of course, since there is LTE support, the price will definitely be higher than the WiFi version. But how much it will cost still remains unknown.

The rest of the features should be the same. So it’ll be useful to call the key features of the original Microsoft Go tablet. The latter is packed with a 10-inch 3:2 (1800 x 1200) multi-touch display. Under the hood, it carries an Intel 7th-gen Pentium Gold 4415Y processor, which is paired with a 4GB of RAM and 64GB of eMMC flash storage. But there is also an 8GB RAM + 128GB SSD variant as well.

One of the selling points of the Surface Go is considered to be its weight of 1.15 pounds and the thickness of 8.3mm. This is also the first Surface product to come with a USB-C 3.1 same as on the MacBook Pro. Although Microsoft’s custom connector is still there. The Surface Go sports a 5MP front camera with support for 1080p videos and there’s an 8MP rear camera supporting HD recording.