The Huawei Mate 20 and the Mate 20 pro will be unwrapped in about two weeks from now. We already know pretty much about both devices, all thanks to the ceaseless leaks and rumors, while the pricing of both the phones have so far eluded us.

Now, just days ahead of the expected launch date, the information reaching us say that the Huawei Mate 20, and the Mate 20 pro will come with a hefty price tag, just similar one or two offerings from Apple. Starting off with the Pro variant, the leaks suggest that the device will go for as much as Fr.999/$1010, while the non-pro variant will go for Fr.799/ $810.

Please do note that the listed prices are both recommended manufacturers price, and as is usually the case, the Mate 20 and Mate 20 Pro final retail prices could go as high as $1100 and $950 respectively. However, given that these prices are in Swiss Franc, we should expect slight variations across the rest of Europe, Asia, or even the US.

Going by the past rumors, the Mate 20 is expected to be powered by the Kirin 980 chipset coupled with 6GB of RAM and 128GB of storage. Several reports also suggest the device will feature a triple-lens camera setup, just like the Huawei P20 Pro. 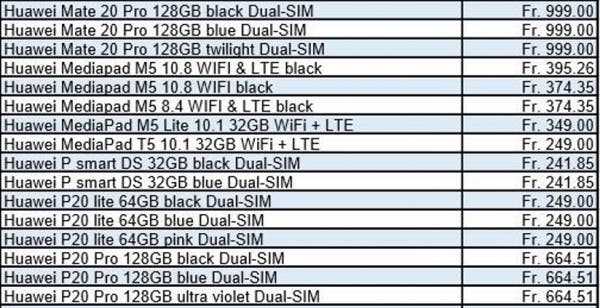 The Mate 20 and 20 Pro will both go official on October 16 in London, where the whole specs, as well as official costs for this device, would be revealed.

Next Motorola One Power Going on Sale Tomorrow in India for Rs 15,999