Nokia’s new upcoming “Mega Display” phone which has been teased for some time is expected to be the Nokia 7.1 Plus, in other words, the Nokia X7. Today, the handset’s design was officially teased online by HMD global. The teaser also reiterates the 16th of October to be its launch date in China.

The Nokia 7.1 plus will have design traits like many Nokia phones this year, as can be seen in the image below. There are the similar notch and the familiar Nokia branding. Moreover, the handset is designed a bit more curving but not that as compared to Sam sung Galaxy S-series flagships which is not the trademark design of Nokia. 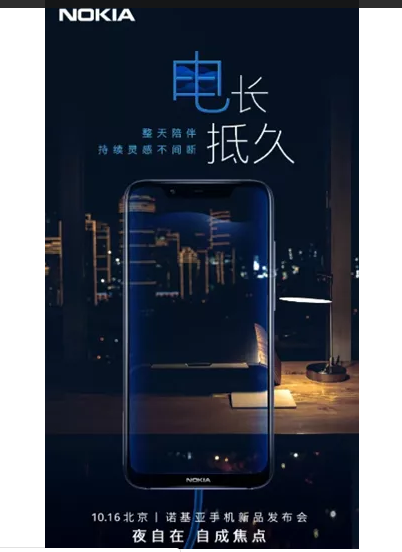 Moving to its specification the phone may have a resolution of 2,246×1,080 pixels with a  6.2 inch IPS LCD screen. Assuming the smartphone will have two versions – one with 4GB RAM and 64GB of inbuilt memory and other with 6GB with 128GB. The processor of the device will be having a whopping 710 Qualcomm Snapdragon 710 SoC and an Adreno 616 GPU. Furthermore, the new phone is rumoured to have a rear camera of 13MP with 12MP dual functionality and an impressive 20MP front shooter. Lastly, the handset will be powered by a hefty 3,400mAh battery and Android 8.1 stock Oreo, if all leaks have been on point.

The device is planned to launch in China on October 16th and it is expected to be coming to India before the next year.