Last month, South Korean manufacturing giant, Samsung, announced its triple camera Galaxy A7 (2018) in Malaysia. Now, recent information on the company’s website suggests that this smartphone is now available in its homeland. The asking price is only KRW 499,400 ($439) which is quite cheap. 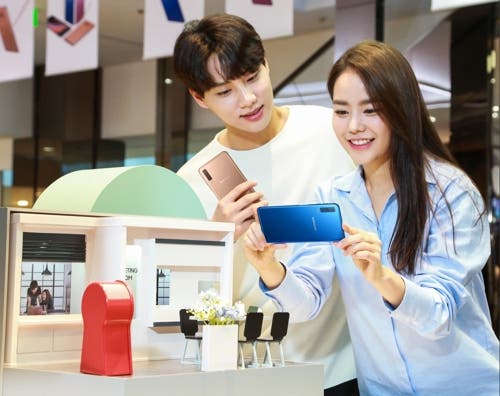 The main selling point of this smartphone is the use of three camera sensors on the rear. It uses a 6-inch Super AMOLED display (Corning Gorilla Glass) with 1080 x 2220 pixels resolution while the aspect ratio hit 18.5:9. We have a 24MP, 8MP and 5MP sensors on the rear. For selfies, we have to rely on a single 24MP shooter. Under the hood, we have an Exynos 7885 octa-core processor. It has six ARM Cortex-A53 cores clocked at 1.6GHz, and two ARM Cortex A72 cores clocked at 2.2GHz. The phone is available in two variants — one with 4GB of RAM and 64GB of storage, and the other with 6GB of RAM and 128GB of storage. This Samsung Galaxy A7 (2018) also comes with a side fingerprint sensor which doubles as the power button.