Today, Xiaomi officially released its latest flagship smartphone, Xiaomi Mi MIX 3. The launch event held at the Forbidden City (Palace Museum) Beijing, China. At the same time, the Xiaomi Mi MIX 3 commenced pre-sale on Xiaomi’s official website at 6 pm. However, it took less than a minute for this smartphone to sell out. The official website now shows that this device is temporarily out of stock. As of now, potential buyers can make a reservation against the next sale. The outright sale of this smartphone will start on November 1. 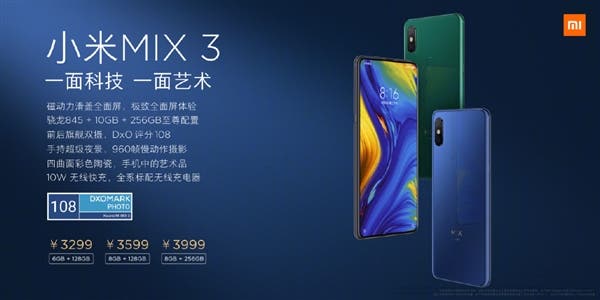 The Xiaomi Mi MIX 3 adopts magnetic slide full-screen design. It has a 6.39-inch FHD+ AMOLED screen while its screen ratio 93.4%. According to the company, this is the first slide-screen full-screen phone. This smartphone is powered by a Snapdragon 845 SoC coupled with 6GB/8GB/10GB of RAM and 128GB/256GB of internal storage. This device comes with a 3200 mAh battery which supports 10W wireless fast charge. In addition, the Xiaomi Mi MIX 3 comes with a dedicated AI button. However, XiaoAi only relates in Chinese thus global users are shut out of that feature.

In the camera department, we have a dual camera setup on both sides. The front has a 24MPconfigurationation while the rear has a 12MP+12MP configuration. On DxOMark, Xiaomi Mi MIX 3 scored 108 points. See the complete specs details and pricing of this smartphone HERE