Chinese manufacturer, ZTE, was at the centre of controversy for a good part of the first half of this year. After the US government lifted its ban, the company is now trying to recuperate. Today, ZTE made the financial records of the first three-quarters of 2018 public. Its Q3 record was also made public. The company had a bleak performance as a result of the ban and recorded a massive loss. The total revenue for Q3 was 19.33 billion yuan ($2.7 billion), down 14.34% year-on-year. Its net profit was 564 million yuan ($82 million), down 64.98% year-on-year. 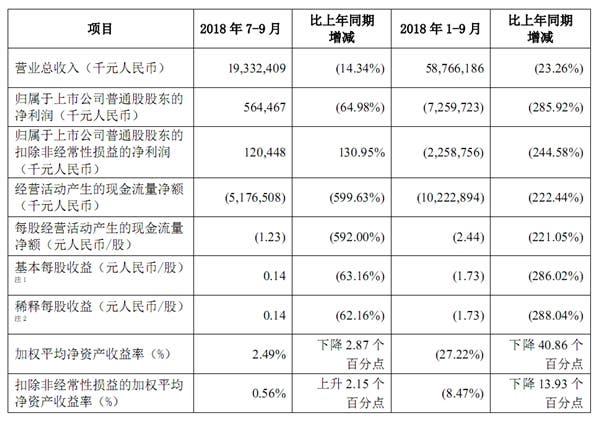 In the first three quarters of this year, ZTE’s accumulated revenue was 58.766 billion Yuan ($8.4 billion).  A year-on-year decline of 23.26%, and a net loss of 7.26 billion Yuan ($1 billion). This also represents a year-on-year slump of 285.92%. ZTE said that the main reason for the sharp decline in performance was the US fine of $1 billion. Secondly, the company’s main business activities went down during the ban period.

ZTE expects a loss of 6.2 – 7.2 billion Yuan for the whole year of 2018. This is a decrease of 235.72-257.61% compared with the previous year’s profit of 4.568 billion yuan. However, in combination with the performance of the first three quarters, ZTE will at least break even in the fourth quarter, and in the best case scenario, it can earn 1 billion Yuan.

Previous Apple Store to open in Bangkok soon; will be first in Thailand

Next Elephone is opening a store in Rabat, Morocco on October 27th