Just after the recent launch of Samsung’s Galaxy A7 with three rear cameras the company is set for the release of the Galaxy A9 2018 with 4 rear cameras in India. This smartphone will be the brands first quad rear camera smartphone. The device has come up on Samsung’s official Indian website and is all set to make its debut in India in the upcoming month November. Also a dedicated page for the device has also been set up, which lets interested consumers register for updates related to the Galaxy A9’s launch date and availability in the country.

The Samsung Galaxy A9 (2018) was launched in Kuala Lumpur, Malaysia recently with a pricing of Rs. 48000, so we can assume it will be available in India around this premium price segment, though the exact pricing and release dates are not known yet.

The Galaxy A9 is the first smartphone ever to feature a telephoto, a wide angle, a depth sensing and, of course, a regular camera, all in the same module. Much like the Galaxy A7, the Galaxy A9 will have a glass design with a metal trim on the rear, which will require cleaning every now and then to keep it nice and shiny. Also on the rear side of the Smartphone will be the fingerprint sensor and the quad camera setup which will be on the top left end in a verticle slide. The screen oh the front has trims on the top and bottom of which the top has a speaker and a selfie camera. 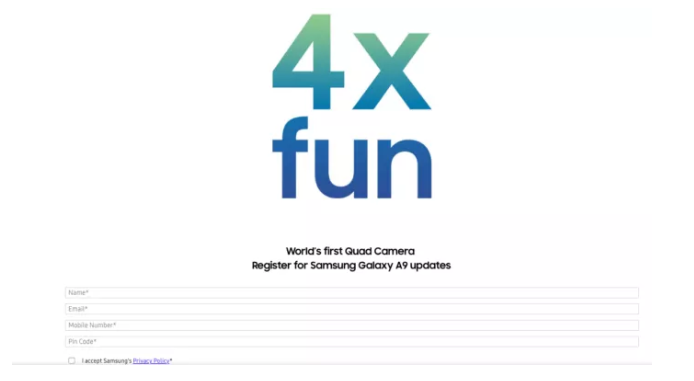 The Samsung Galaxy A9 features a 6.28-inch full-HD+ Super AMOLED display with 1080×2280 pixel resolution. The display is said to offer an aspect ratio of 18:9. The device is said to be powered by octa-core Qualcomm Snapdragon 660 processor.

As for the variants, the Samsung Galaxy A9 (2018) launched in Malaysia with 2 variants, the 6 GB RAM + 128GB ROM and 8GB RAM +128GB ROM configs. However, the recent listing on the official Indian website of the brand mentions 6GB RAM variant, and says “8GB RAM option available in certain countries.” This suggests the smartphone may come with 6GB of RAM.

Last but not least the Galaxy A9 (2018) runs Android Oreo with Samsung’s Experience UI on top, though Andriod Pie has been out for some time now there are no details for an update sadly. The connectivity features include 4G LTE, dual-band Wi-Fi, Bluetooth 5.0, USB Type-C, NFC, and A-GPS. And to keep it all working the device will come with 3,800mAh battery with fast charging support.