Today, Lenovo Group Vice President Chang Cheng has posted a teaser on the social network Weibo shows that the Lenovo Z5 Pro smartphone will have a dual AI main cameras 24 MP + 16 MP on the back.

The image also includes a slogan, “An Epochal Flagship” (an era of high-end smartphones). and it will have one of the most advanced cameras in a Lenovo smartphone. The 24 MP + 16 MP setup will have AI Super Night Mode scene and AI Video. 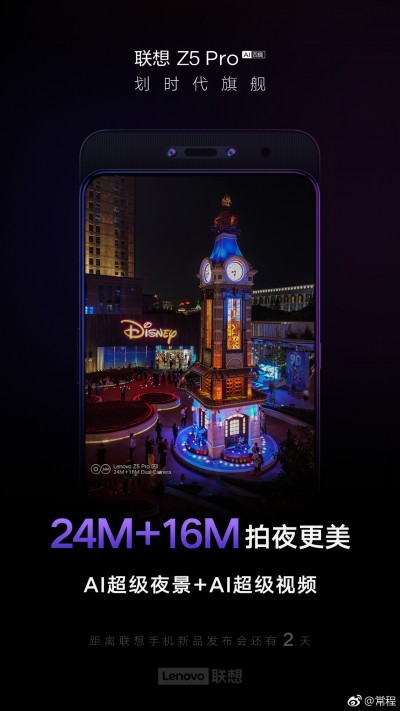 The photo also confirmed that the front camera is equipped with dual lenses in the slider, which is placed on either side of the speaker. The photo also shows that the camera is capable of taking good pictures in low light conditions.

It is worth to mention that Chang Cheng has released another poster earlier on Weibo, showing two functional highlights of the forthcoming Lenovo flagship. Those features include the AI intelligent noise reduction and Dolby panoramic sound.

On November 1, Lenovo Z5 Pro will be released, then everything will be clear, wait patiently for more.