Apparently, Samsung is seriously bringing some features of its flagships to the midrange class of smartphones. The so-called AR Emoji feature was something exclusive to the company’s high-end devices, and now the first budget-friendly smartphone to receive it is the Galaxy J7 Duo. 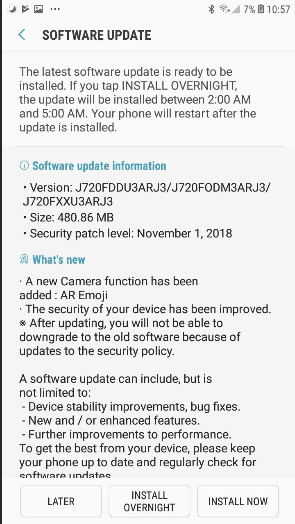 The Galaxy J7 (2018) is now available for grabs in the United States. Although this update is meant for the dual-SIM variant, it may also come for the single-SIM version in the upcoming days. Speaking of this update, it brings the AR Emoji feature alongside the latest November Security Patch.

The update in question carries the J720FDDU3ARJ3 firmware version and weighs in at 480MB. Since this is a phased rollout, it may take several days to arrive for all units of the smartphone. While we don’t know if this feature will arrive for more budget Samsung smartphones, it’s good to know that the South Korean maker is fulfilling its promise of bringing more flagship features to the other segments.

Previous LG's Foldable Smartphone to make a debut at CES 2019