Recently, the Washington Post conducted an interesting test-research, which showed the battery life of current smartphones is worse than that of their previous models. It’s mainly related to the increasing performance requirements of new technologies for lithium-ion batteries. 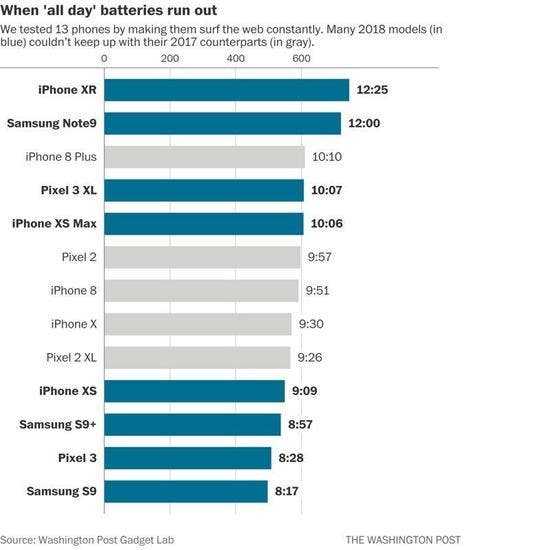 In a series of battery life tests, it was found that if the brightness of the smartphone display is the same, and the tested smartphone continuously accesses and loads the same website, the newer smartphone has a significantly lower battery life than a number of smartphones launched in the past few years.

In this sense, one of the most interesting models is the iPhone. The iPhone XS has an average life of 21 minutes less than the previous generation iPhone X. Moreover, Google Pixel 3 has the most significant battery life impact, and its battery life is one and a half hours less than Pixel 2.

In addition, in the battery life test, the iPhone XR lifetime is longer than the Pixel 3XL, the Samsung Galaxy Note 9, and the iPhone XS Max.

Nadim Maluf, the CEO of a Silicon Valley firm called Qnovo, told the Washington Post that battery performance is improving at about 5% per year, but the power consumption of smartphones is growing faster. In order to find out the main reasons for a faster power consumption. The Washington Post consulted other technology sites, such as Tom’s Guide and Cnet, and concluded that high-resolution OLED displays and cellular connections are the main factors affecting battery life.

However, the conducted battery life test is focused on the display, but there are other factors that affect battery life. Say, a phone may consume more when turning on and off some applications. In this regard, the iPhone XS is better than the iPhone X because Apple has improved the processor.

However, the Washington Post said that due to different focus tests and different actual usage, changes in battery life make it difficult to judge whether the entire battery life is increasing or decreasing over time.

Previous Global Smartphone Shipments in the Third Quarter of 2018

Next Apple Released Q4 Financial Report, Which is The Last One