A few days ago, the Oppo RX17 Neo was spotted in a Dutch online store. This sparked speculations that this smartphone will be released in Europe pretty soon. Now the company has revealed that this smartphone will be available for purchase in Italy, France, Spain, and the Netherlands on November 16. Well, not only the RX17 Neo but the Oppo RX17 Pro will also be available. 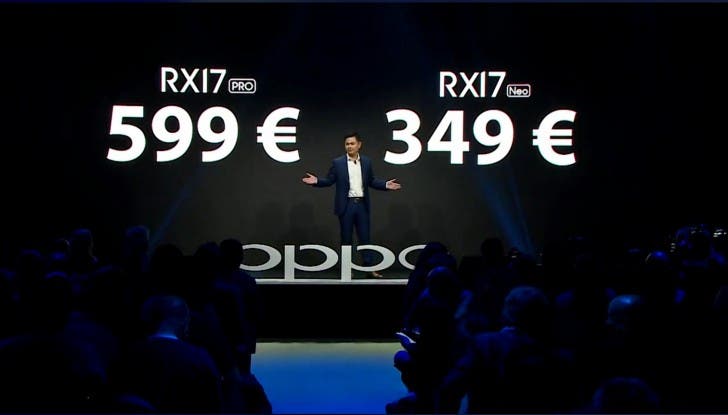 The Oppo RX17 Pro is powered by a Qualcomm Snapdragon 710  processor coupled with 8GB of RAM and up to 128 GB of internal storage. It uses a 6.4-inch 1080 x 2340 AMOLED touchscreen with an on-screen fingerprint sensor. It runs on Oppo’s ColorOS 5.2 on top of Android 8.1 Oreo and has a 3,700 mAh battery to keep its lights on. In the camera department, we have a 12MP+20MP configuration on the rear and a 25MP shooter for selfies.

The appearance of OPPO RX17 Neo seems consistent with the OPPO R17. According to the listing, this smartphone is available in three variants. We have the 4GB+128GB, 6GB+128GB and 8GB+128GB configurations. The OPPO RX17 Neo is powered by a Qualcomm Snapdragon 660 SoC. This is a step down from the SD670 found on the OPPO R17 National Bank version. It’s also lower than the Snapdragon 710 chip that comes with the OPPO R17 Pro. Its battery is also 100 mAh less than the Pro model, it has a 3,600 mAh battery to keep its lights on. Although this smartphone uses a lower processor, it still comes with an on-screen fingerprint sensor. This is perhaps the most interesting aspect of this device.

The Oppo RX17 comes with a €599 price tag while its counterpart, RX17 Neo comes with a €349 selling price as earlier observed on a Dutch website.