This is @SamsungMobile’s Infinity Flex display technology — 7.3-inch foldable display, which can be folded and unfolded “hundreds of thousands of times." #SDC18 pic.twitter.com/NmQx4gMDiR

Samsung is calling the foldable phone’s display technology “Infinity Flex”. According to Samsung, they managed to create an AMOLED display that’s thin, can be folded “hundreds of thousands of times,” and is ready for mass production in the coming months.

Samsung’s device using the Infinity Flex Display has a 7.3-inch panel that’s designed to be folded in half vertically, and the fold happens inward so that the display is protected while the device is folded. (This particular device also has an additional traditional fixed display on the outside of one half, called the “cover display,” to be used when the device is folded shut). Samsung says the display will withstand “hundreds of thousands” of folds, thanks to a new screen covering and thinner overall display components that can handle the tight bend without breaking.

But Samsung isn’t keeping this technology exclusive to its own devices, it goes further than what the company showed off in its reference device, and will be available to other companies that want to develop foldable phones.

It’s a phone… It’s a tablet… It’s a phone that unfolds into a tablet! #SDC18 pic.twitter.com/FgwpJPjqTn

One UI interface for foldables 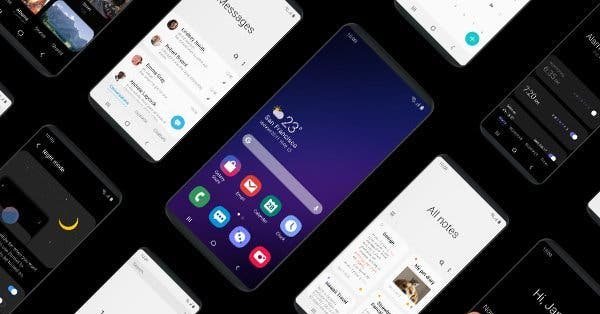 In addition to unveiling its much-rumored folding phone at its developer conference today, Samsung also shared its plans for a cleaner Android skin. The new look will be called One UI, and feature not only a refreshed design with rounded corners in its icons, but also a support for foldable screens.

Samsung has worked closely with Google and Android developers to design a UI that’s minimalist and keeps the relevant content on the bottom half of the screen ensuring easy one-handed operation at all times.

But at the same time, the new UI optimizes the screen area for better productivity on the go as well. As you unfold the phone, the UI seamlessly transitions into an almost tablet-like device giving you more freedom to multitask. Samsung says that the One UI can keep three apps open at once making the most out of the big foldable panel.

It is still unclear when the smartphone will be presented next year. Samsung has just announced that it “will arrive soon”. We heard the company is gearing up to start mass production in the coming months.