Xiaomi’s recent flagship smartphone, Xiaomi Mi MIX 3 is one of the most desired smartphones in the market presently. This smartphone is scheduled to go on sale on November 11 and the company has announced that the special emerald colour version will be on the shelf on that date. Interestingly, the emerald version will still have a 3299 Yuan starting price just like the other versions. This smartphone is already available in third-party stores and those who cannot purchase the device out of China can always use the third-party stores.

As a reminder, the Xiaomi Mi MIX 3 uses a 6.39-inch FHD+ AMOLED screen (Corning Gorilla Glass) while its screen ratio 93.4%, this is actually lower than we expected but it is definitely decent.  According to the company, this is the first slide-screen full-screen phone. A soft down-slide of the display reveals a 24MP+2MP deal selfie camera. This smartphone is powered by a Snapdragon 845 SoC coupled with 6GB/8GB/10GB of RAM and 128GB/256GB of internal storage. The 10GB of RAM model is called “Forbidden City”, named after the place it was released. The battery is a bit disappointing – 3200 mAh.  However, with all the optimizations that come with Android 9 Pie, we are certain that it will seamlessly take an average phone user through a day. Moreso, it supports 10W wireless fast charge. 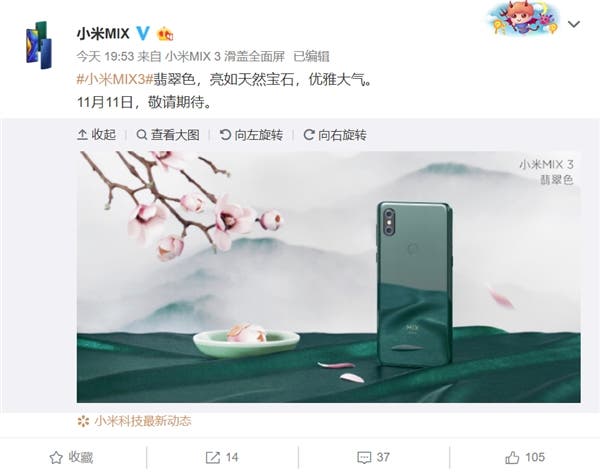 Read Also:  Xiaomi logo in new colors: The company patented it in black and white