Just last week, Korean tech giant – Samsung – unveiled its upcoming foldable phone which will probably see the light of day on March 2019 for a price of around $2000.

Well, apparently, the company isn’t only focusing on bringing the foldable display tech – also known as Infinity Flex Display – to the smartphone world, but they’re also thinking of adopting it in the tablet industry.

This isn’t surprising news as the foldable phone itself we saw a week back can also be considered a small tablet, but the latest patent found online confirms it further. 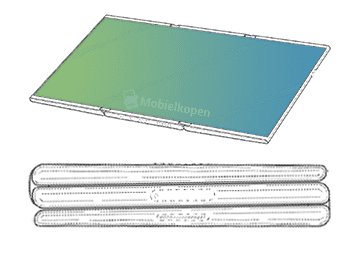 The patent does indeed show a bigger device which this time folds two times instead of “just” once. This means we have a final screen size that’s three times as big as the initial one – probably even bigger.

This dual fold design does reduce the size of the tablet quite a lot surface wise, but it’ll make it much thicker as well, compared to the one-fold phone already showed off. The added thickness might lower its portability as it’s less pocket-friendly, thus making people double-guess whether that’s an improvement or just a gimmick.

What we’re confident of though, is that if there’s a company that can manage to bring a foldable tablet into the market, it is probably Samsung with their endless resources and already available display tech.