Earlier today, South Korean manufacturing giant, Samsung, announced its new SoC, Exynos 9820. Now, a close comparison between the Exynos 9820 and its predecessor Exynos 9810 was done by AnandTech. Did Samsung really upgrade its new chip? You will be the judge. 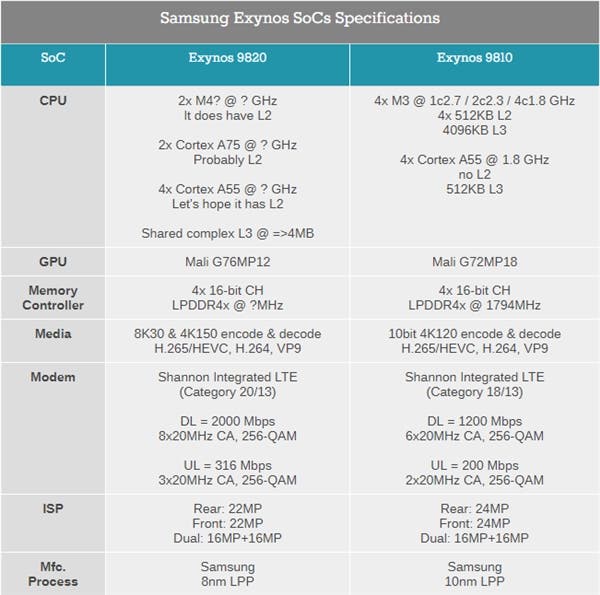 According to AnandTech, Exynos 9810 was not a very successful chip because Samsung’s self-developed cat architecture, Exynos M3, has some defects resulting in its low performance, not as good as the Snapdragon 845. In addition, Exynos 9810 sacrificed performance to ensure battery efficiency.

Now the new Exynos 9820 has been officially unveiled. It uses a “2+2+4” three-cluster eight-core architecture consisting of two self-developed M4 cores, two Cortex A75 cores and four Cortex A55 cores. In terms of graphics processing, the Exynos 9820 integrates the Mali-G76 MP12, which has 40% higher graphics processing power than the previous generation Mali-G72 MP18, 35% lower power consumption, and 3840 x 2400 and 4096×2160 screen resolution. On the process, Samsung Exynos 9820 is based on the Samsung 8nm LPP process. In addition, the new Exynos 9820 processor also has a built-in NPU (Neural Network Unit), which is mainly responsible for AI operations, and its AI computing power is 7 times higher than that of the previous generation Exynos 9810. By convention, the Samsung Galaxy S10 is likely to be the first to carry this chip (some versions will be equipped with Qualcomm Snapdragon 8150 processor). In theory, this new chip is an upgrade of its predecessor. Wha doo you think? Let us know your thoughts in the comment

Next Three models of Samsung Galaxy S10 are in testing