Earlier on this month, the popular research company, Counterpoint shared its vision regarding the numbers for the global Q3 market, today the research firm brought some new details and a cool infographic telling how the companies performed in the smartphone segment during the three month period that started in July and ended in September. 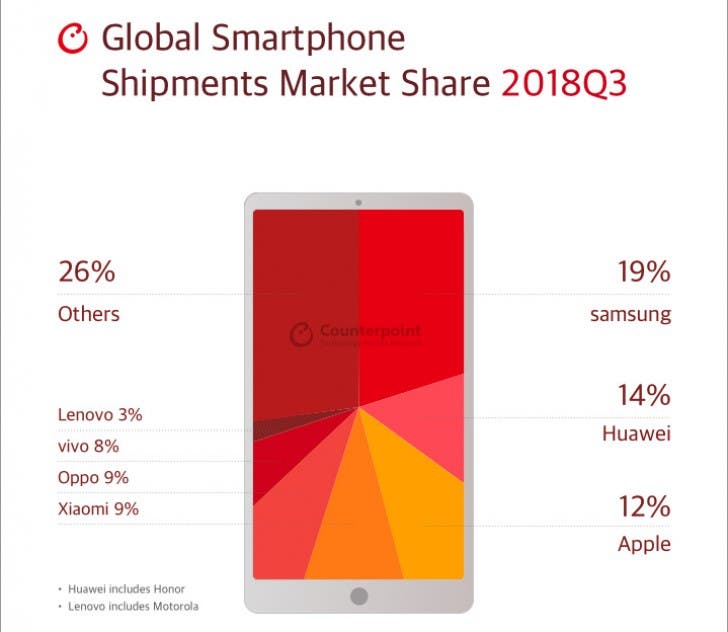 In the months of July through September Samsung captured the most market share with a 19% slice of the cake, Huawei came in second with 14%, while Apple was the third member of the podium with 12% of the market share. Oppo and Xiaomi achieved the same 9%, while Vivo came just 1 point behind with 8% of the Q3 shipments. Lenovo achieved a 3% margin, and while HMD didn’t ship a lot of smartphones, its shipments grew 73% over the same period in 2017.

Worth noting that the Q3 of 2018 shipped 5% fewer smartphones than the same period in 2017. This may sound a little concerning for the industry, but it’s pretty understandable. According to Counterpoint, about 380m units were shipped during the three month period. 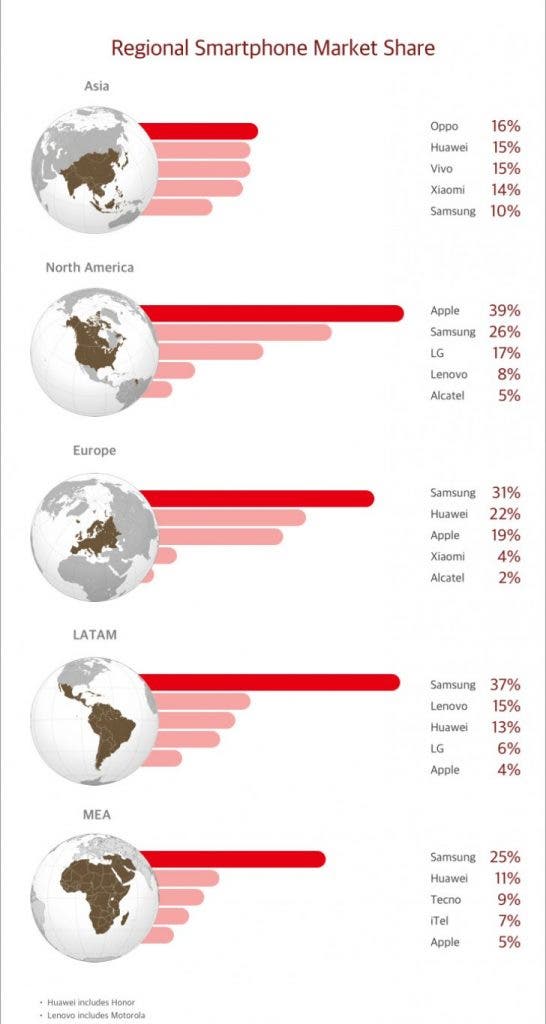 The breakdown comes by the fact that Oppo took the Asian market with 16% total, followed by Huawei with 15% and Xiaomi with 14%. Samsung the world’s top smartphone company had to deal with just 10% of the Asian market, being forced to see local companies eating its former slice of the cake. Unsurprisingly, Apple took the biggest portion of the North American market with 39% of the total shipments, followed by Samsung with 26%. Samsung strongest market was Europe with 31% of market share, followed once again by Huawei with 22% and Apple’s 19%.

Overall the Q3 was pretty good for some companies. despite the decline in Shipments. Samsung already posted record profits during the period, while Xiaomi offset a declining Chinese market. Curiously, there’s something important in all the results, Huawei is slowly reaching Samsung, but still has zero importance in the North American market. If the company really wants to grab the crown of the smartphone industry, it will need to think in a better strategy for conquering customers, after the whole fiasco involving its arrival in the United States back in 2017.

Next HTC will not give up from smartphone market, more devices coming in 2019