Information about a Samsung phone with a foldable display is as old as the hills. However, it wasn’t until recently that the Korean Chaebol demoed this technology giving us an idea of what the final device will look like at its annual Samsung Developer Conference.

First sighted by Sammobile, the Korean giant has filed for the trademark protection of the Galaxy Fold moniker, fueling speculations that the upcoming device might be so named. The trademark detail indicates Samsung is protecting the moniker for use in a variety of products including smartphones, but as with any patent protection, this isn’t a confirmation that the first foldable phone from Samsung will be called the Galaxy Flex, so do not get your hopes high. 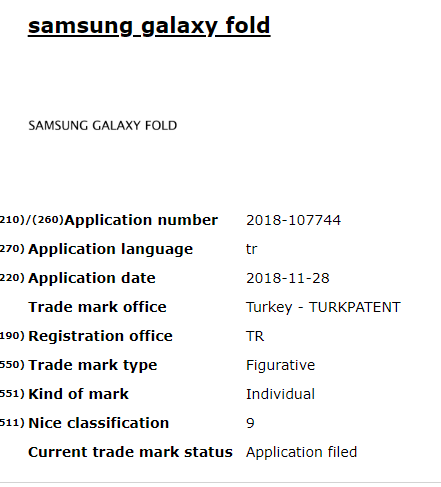 Only a few days ago, one of Samsung’s archrival – LG mobile filed for the protection of similar names for its upcoming foldable phone. Samsung, however, isn’t in a tight race with LG, but with Huawei who might be releasing its foldable phone before Sammy.

Previous Vivo Nex will land in Europe soon for $966

Next Meizu 16 to debut in India on December 5