Nubia has long been a separate company from ZTE but it appears that some of the ZTE traits still lives with Nubia. In June last year, Nubia released its bezel-less flagship, Nubia Z17 and at the time, it was pre-installed with the Nubia UI based on Android 7 Nougat. However, this smartphone subsequently got the Android Oreo update. It is now clear that the Oreo update will be the first and only major update that the Nubia z17 will get.  The company announced that it would stop the update development of Android 9 Pie, which means that its official system will stop at the current Android 8.1. This is quite disappointing and its a shot on the leg for owners of this supposed flagship smartphone. 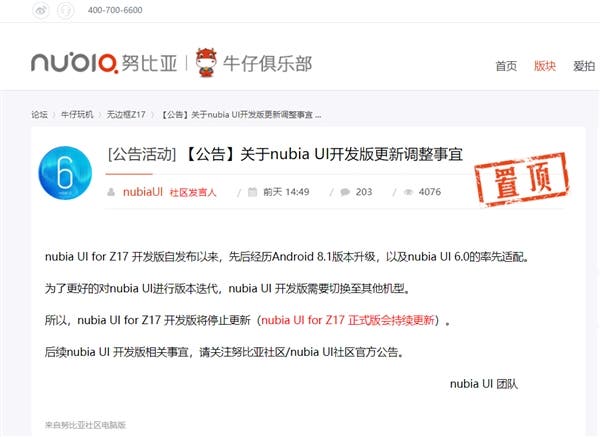 Recently, Nubia issued an announcement in its official forum on “Regulations on the update of the Nubia UI development version”. Since the release of the Nubia UI for Z17 development version, it has experienced Android 8.1 version upgrade, and Nubia UI 6.0 was the first to adapt. The Nubia Z17 uses the aRC3.0 borderless technology to give this 5.5-inch phone the same grip as a 5-inch phone. It is powered by a Qualcomm Snapdragon 835 processor coupled with 6GB/8GB of RAM and 64GB/128GB of internal storage.  Honestly, the Nubia Z17 was excellent in both hardware innovation and hardware stacking, but it is a bit regrettable its system maintenance is abysmal.

Previous Last Chance to get your iPhone Battery Replaced for $29.99