Today, AnTuTu officially released its list of the top 10 best performing Android smartphones for November 2018. The top end of this list is dominated by Huawei’s 7nm Kirin 980 phones. This is expected as it is the only 7nm chip on an Android phone as of now. However, with the launch of Snapdragon 855 and Exynos 9820, there would probably be a shakeup of the top end of this list in its January ranking. 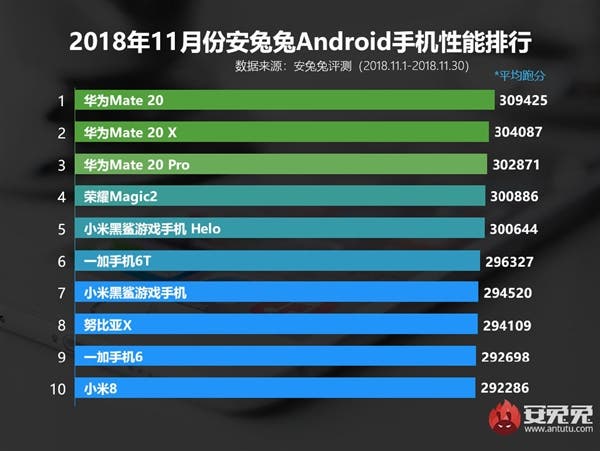 The Nubia Red Magic Mars was released late in November so there were not enough data to establish an average point while the regular Meizu 16 had a serious firmware update issue which caused fluctuations in running points and the average score declined significantly such that it dropped out of the top 10. The Kirin 980 models will continue to dominate the top ranks of AnTuTu’s list until Snapdragon 855 and Exynos 9820 powered phones are released.

The AnTuTu scores detailed above are averaged, and does not represent the highest score per model (actual running results may fluctuate, which is a normal phenomenon). The period of data collection is between November 1, 2018 to November 30, 2018 and at least 1000 units per model are needed to establish an average.