As expected, Huawei Nova 4 will be launched on December 17 as a successor to the Nova 3 which was introduced in July this year. Using the new in-screen camera design, the Nova 4 promises to offer a greater screen-to-body ratio. In addition, it will also be equipped with a single camera selfie on the front and a 3 rear camera sensors in the back, in which the main sensor has a resolution of 48MP. 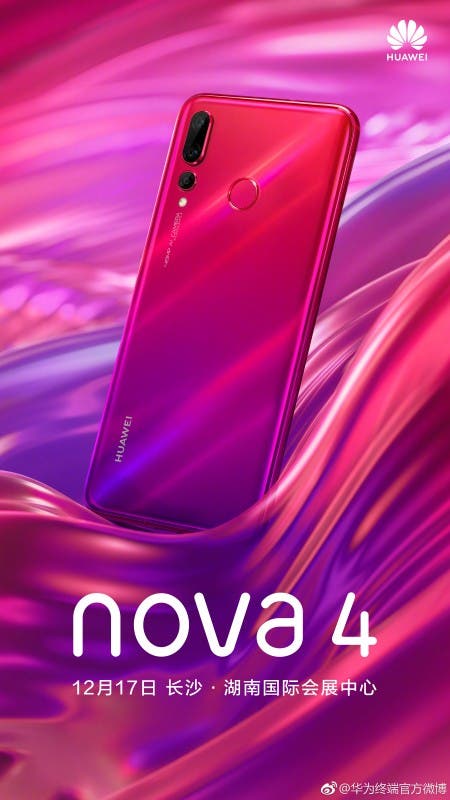 The Chinese manufacturer has shared an image of the Honey Red version of the Nova 4 that confirms the presence of this camera. It must be said that Huawei Nova 4 Honey Red version has an extremely attractive color. The back of the phone is red at the top, stretching and gradually turning purple to the bottom.

The phone will have a fingerprint sensor located in the back that made of the glass alongside with the 3 camera sensors and the LED flash.

Huawei Nova 4 is expected to be launched in China with many different versions, including standard and high end. Accordingly, the standard and high-end versions of the Huawei Nova 4 will be equipped with the same processor, three back camera, RAM and memory are the same. The only difference between the two versions is that the premium model will have a 48MP camera sensor on the back.

Huawei Nova 4 will have a 25 megapixel selfie camera on the front with AI beauty mode. The standard version of this phone will have 3 cameras on the back with a resolution of 20MP + 16MP + 2MP respectively. In the more advanced version, the 20MP main sensor will be replaced by a 48MP sensor, while the other sensors will remain.

The Huawei Nova 4 will come with a 6.4-inch screen and Full HD+ resolution (2310 x 1080 pixels) and a 19.25:9 aspect ratio. On the inside, it has the Kirin 970 processor seen on high-end smartphones from Huawei and Honor in 2017. In addition, the phone is also equipped with Turbo GPU technology to increase GPU performance.

According to the leaks, Nova 4 will be equipped with 8GB of RAM and 128GB of internal memory. The source has not confirmed whether the device supports expansion of storage through microSD memory cards, but because the predecessor model has a memory card slot, we expect that the Nova 4 will also have this feature. The included battery will be 3750mAh, supporting fast 18W charging like Nova 3.