In recent times, there has been a lot of rumors and speculations regarding the upcoming Honor V20 which is expected to launch in China later this month. This smartphone has been teased severally and its 48MP rear shooter particularly attracts attention. The complete specs of this smartphone are still under wraps and AnTuTu recently gave an insight into the hardware of this smartphone. 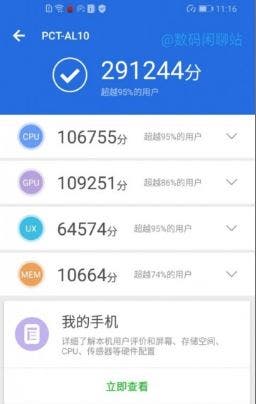 As expected, this flagship smartphone will be powered by a Kirin 980 SoC coupled with 8GB of RAM and 128GB of UFS 2.1 storage. A similar smartphone, Huawei nova 4 will be powered by the older Kirin 970 chip but will also sport a 48MP camera. The document did not indicate if there will be other options but that is likely the case. The software operations will be handled by Android 9 Pie out-of-the-box. Interestingly, its benchmark score is 291244 which is consistent with Kirin 980 SoC.

As of now, the exact price of this smartphone has not been revealed but the Honor V20 is believed to cost about $435. In China, this smartphone will be released on December 26 but globally, we will have to wait until the latter part of January.