The competition in the mobile and wearable segment is always forcing companies to lift up new tendencies and put some effort in the search for new innovative ideas. Anyway, it’s always good when a company develops something that is meant to bring more than just neat features, something that can really help to improve the people’s life. Well, that’s exactly what Microsoft seems to be planning with a new wearable device.

Microsoft already brought up some interesting ideas with Microsoft Band 2 and its maximum volume of oxygen (VO2 max) tracking. But seems that the company still has some ideas to implement in a brand new device. A new patent was published today by UPSTO with the “WEARABLE DEVICE” title, revealing what seems to be a really interesting device.

The document was filed back in June 2017 and describes a device with an array of conductors in its heart, potentially mounted in a way that would allow adjustments in their position. The conductors would work together with a specialized sensor, and their purpose would be to do their best in reducing or stabilizing involuntary movement in an adjacent joint or even entire limb. 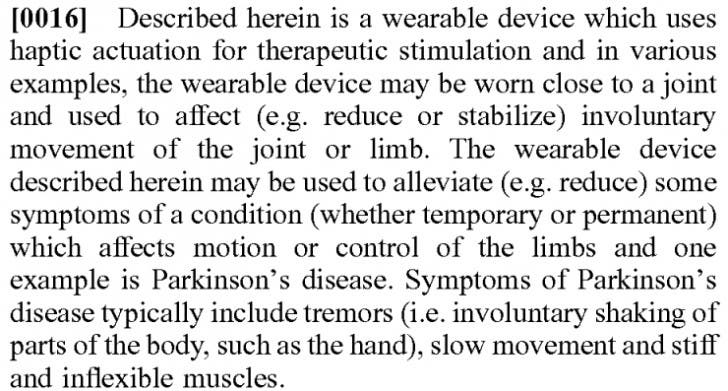 This implementation would bring some benefits for people suffering from Parkinson’s and many other health conditions. The company is also aiming to bring a device with a capable battery that can ensure at least a full day of usage without interruptions. Other communications protocols such as Wi-Fi and Bluetooth will also be included in the package. The device will also be able to get connected with the smartphone, so users will get tracking and reporting capabilities.

That’s a pretty neat device that will not only come to compete in the segment but will also be a good alternative for those suffering all the problems caused by Parkinson. Worth noting that these patents are usually concepts, and only time will tell if they will actually become a commercial product, but considering the benefits brought by it, we really hope that Microsoft finishes this project.

Next Xiaomi's new Rice cooker gets more than $144.000 in crowdfunding in just 1 hour and 40 minutes