It was only a couple of months ago Oneplus introduced the One Plus 6, and fast forward to today, the firm released the iterative upgrade – the Oneplus 6T, and the OnePlus 6T special edition, all of which are receiving a bit share of sales all thanks to the firm’s marketing strategy.

Like every other device released earlier this year, it is the only natural the firm start preparing for its NEXT Oneplus phone which we understand won’t arrive until sometime in the second quarter of 2019.

Speaking of the firm’s plans for 2019, words on the street says the company is hard at work preparing two flagship smartphones; the Oneplus 7 – the real successor to the Oneplus 6 and probably a 5G model which probably will arrive in the early days of 2019. While we are not sure if Oneplus will eventually settle for the OnePlus 7 moniker, we now have some leaked images of what seems to be the Oneplus 7 or OnePlus 5G smartphone.

This leak comes courtesy of a reliable tipster @IshanAgarwal24 citing an anonymous source. As you would notice from the image, the leaked image appears to have emanated from an insider who may have leaked a slider shot from one of the company’s internal meeting, with OnePlus CEO Pete Lau in attendance. 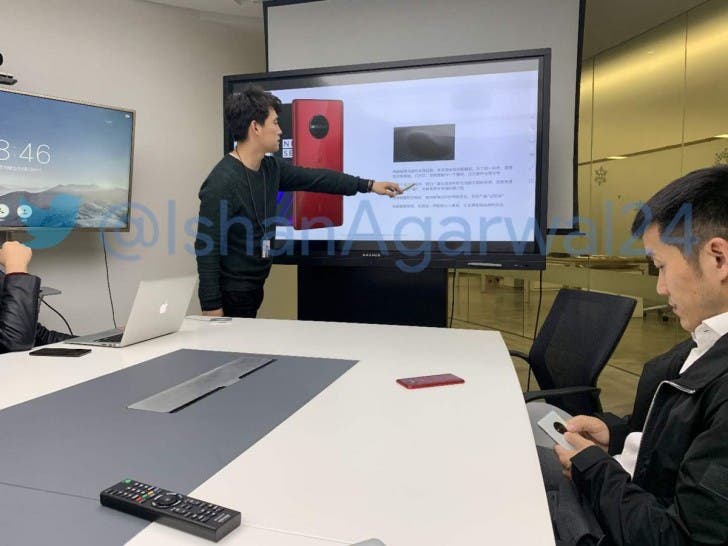 Aside from the alleged Oneplus 7 prototype on the presentation slide, CEO Pete is seen holding on to one, while another is seen on the table. One thing, however, is very obvious, and that is the fact that COMPANY could be considering adopting a different design language. Specifically, the prototype Oneplus 7 is seen with a big circular ring on the back panel similar to Motorola’s now traditional circular ring pattern. Additional details are quiet scarce at the moment, but our guess is that the circular ring might be home to triple or even quad camera setup.

Read Also:  OnePlus 11 Pro poses in all glory; iconic feature is back
As always, we won’t know how accurate these leaks are until there is an official confirmation from OnePlu.

Next IDC Predicts Gobal Wearables Shipments To Reach 125mln In 2018