This morning, Honor has officially announced customers can reserve the upcoming Honor V20 smartphone by paying 100 yuan ($14.50). The pre-sale has started at 10:08. It should be noted that the official price of the V20 has not yet been announced yet, and we have to wait until December 26, when this full-screen handset will be officially uncovered. 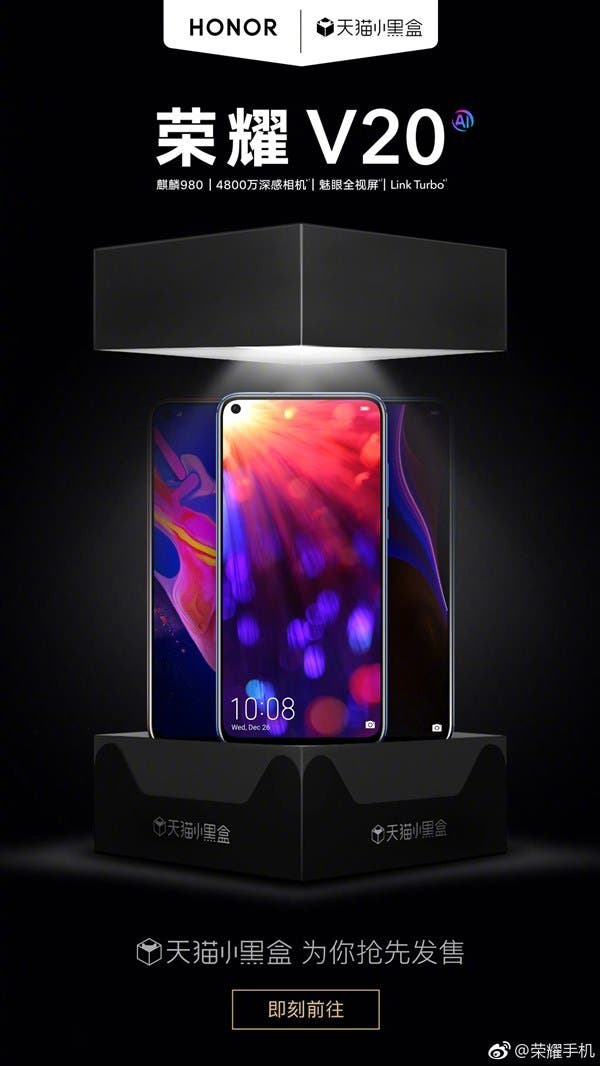 On December 10, Honor released a new technology of ‘Magic Eye Full Screen’ in Hong Kong. As you guess, the upcoming Honor V20 will be equipped with this technology. Those who are familiar with this feature, know the 6mm diameter of the hole area is reduced to 4.5mm. Thus, it’s going to be the industry’s smallest hole. It’s called ‘blind hole’ and it will host a 25MP front camera. By the way, the newly announced Huawei Nova 4 comes with an identical opening on the screen as well.

However, this is not the biggest selling point of the Honor V20 because, for a regular user, it can’t be a decisive factor when buying a new punch-hole display phone. In some sense, the V20 is going to be the brand’s own version of the Nova 4. As you remember, the latter came with the industry’s first 48MP camera. This camera sensor carries is Sony’s high-end CMOS of IMX586, which comes with 1/2.0-inch large sensor size, 4-in-1 color filter, and 4x hardware HDR.

So the Honor V20 will. Apart from this, our protagonist will be packed with a Kirin 980 chip and run on EMUI 9 based on Android 9 Pie. The phone will also use the new Link Turbo which is expected to boost Wi-Fi network signals. Under the hood, we will find a 4000mAh battery supporting 22.5W fast charging.

According to the recently spotted photos, the Honor V20 will have to variants. The 6+64GB should be available at 2799 yuan and the 6+128GB version will come at 3299 yuan. But there should be the Maserati custom version as well.