Apparently HMD Global started to push the Android 8.1 Oreo update for the cheap Nokia 3 handset. The phone originally came in 2017 with Android 7.0 Nougat on board, then was updated to Android 8.0 Oreo back in April.

Now the phone is receiving its second Android update to the 8.1 version of Oreo. Despite the fact that Android Pie is already here, just a few phones have it, so it’s reasonable to consider that this cheap smartphone is receiving a good treatment in terms of an update. 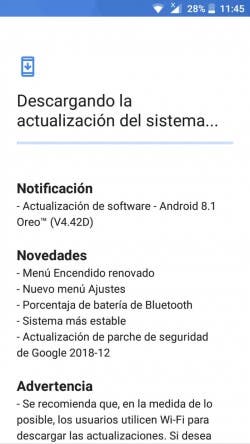 Worth noting, that Nokia is one of the few companies that already pushed Android Pie to plenty of its smartphones, so Nokia 3 users may be a little sad at the moment. On another hand, is good to know that the phone hasn’t been forgotten by the company, which promised to deliver Pie to all their handsets. So while it may take months, someday in the next year, the promised update will come for the cheaper model.

The Android 8.1 Oreo update brings the December Security patch to the Nokia 3, meaning that at least the phone will be running the latest batch of security measurements. Since this rollout is gradual it may take some days to arrive for all Nokia 3 units across the Globe.