There have been signals that we might soon get a refresh of the Moto G series of smartphones. In the most recent leaks of Motorola’s upcoming Moto g7 series, we got to know via a leaked press render that the firm might be adopting two different screen notch options for the Moto G7, G7 Plus, G7  Play and G7 power.

While the Play and the base G7 have picked up the EEC and the FCC certification, the G7 power has now been spotted on the Geekbench site running android 9.0 Pie.

Apparently, the Moto G7 power is set to come off the box with the Qualcomm Snapdragon 625 14nm octa-core processor under the hood, and that will be aided by 4GB RAM. The output of that combination is 1,286 points in the single-core test and 5,443 points in the multi-core test. Both scores appear way high for a device with the year-old SoC, and that makes us think the device might be getting a slightly more recent SoC. 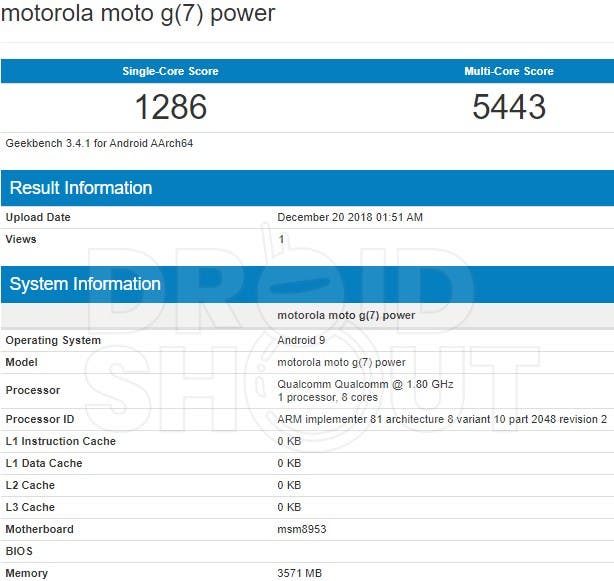 The Moto G7 Power as the name suggests is expected to be the most powerful of the G7 series -powerwise and is tipped to come fitted with a 5000mAh battery. Based on previous reports, the Moto G7 power is tipped to come flaunting a 6.22-inches notched display,  8MP selfie snapper,  12MP main snapper, as well as 32GB and 64GB storage variants.