Vivo has been in the spotlight since the inception of 2018, and it appears not to be slowing down the temple. An as of yet unidentified Vivo phone has just surfaced on the GeekBench site giving us the impression that it might be due for unveiling in no distant time.

Bearing the model number VIVO 1819, the upcoming Vivo phone alongside the VIVO 1818 and Vivo 1820 had earlier secured the EEC approval in Russia. The device is seen taking the Geekbench test with Android 9.0 Pie OS on board. The listing further tells us the VIVO 1819 will come packed with MediaTek MT6771 SoC which is nothing but the Helio P70 chipset coupled with 4GB RAM. The Helio P70 chipset was launched about two months ago and has found itself in the Realme U1. The chipset is a 12nm design process and is packed with an octa-core processor, bearing four A73 cores and four A53 cores, coupled with Mali-G72 GPU — similar to its predecessor – the Helio P60 announced earlier this year. 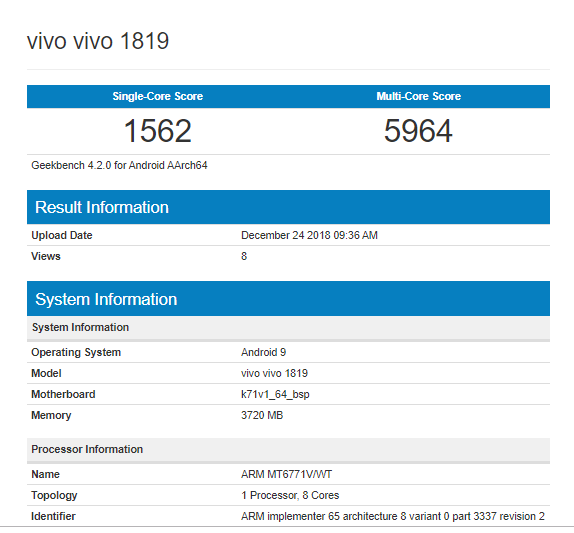 In the GeekBench listing, the Vivo Phone received 1562 points in single-core test and in multi-core test it received 5964 points.

As of now, we have no detailed specs and possible release date of the device, but our guess could be for an early 2019 release.