Xiaomi TV line up has a variety of sizes from the 32-inch display version to the 75-inch display. Generally, its TV sale is doing very well in China but it’s taking a bit of time to move outside of China. Today, Xiaomi announced that the Xiaomi Mi TV 4A 32-inch version has been reduced to an all-time low and this TV will sell for 699 Yuan ($102) from 0:00 on December 28th. Of course, this price will only last for an unspecified period of time. 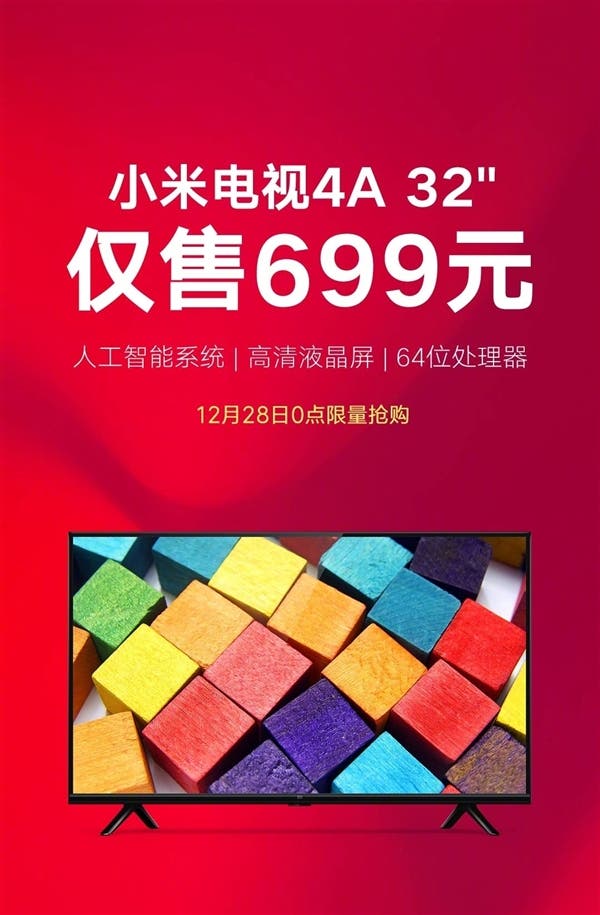 The Xiaomi Mi TV 4A 32-inch version is the by far cheapest TV in the Xiaomi TV lineup. Recently, it set a new record for Chinese television industry by selling 100 million units within eight months. The major selling point of this TV is its support for voice interaction. Specifically, it supports keyword search, title-on-demand, multi-round dialogue, star finding, and other functions. This only works for native Chinese users but it can recognize different Chinese dialects. The sound of the elderly and younger folks are easily recognized.

This Xiaomi Mi TV 4A 32-inch version comes with a 1366 × 768 resolution. It has a refresh rate of 60Hz, viewing angle of 178 degrees, and it is equipped with a quad-core 1.5GHz Cortex-A53 architecture processor. The SoC is supported by a 1GB of RAM and 4GB of internal storage. For sounds, The two 5W stereo speakers are available.