Huawei Technologies filed a trademark on December 28 in Peru for the name ‘3D CuteMoji’. For the Huawei P20, the company launched the 3D Live Emoji/Qmoji animated feature. The trademarked 3D CuteMoji may use the 3D sensor components that come with the Huawei P30 series which should enable it to support more realistic characters/animations. Considering that Huawei Mate 20 Pro is equipped with the 3D structured light technology and Honor V20 uses a rear 3D ToF camera, it is expected that the Huawei P30 will integrate the two advanced technologies. 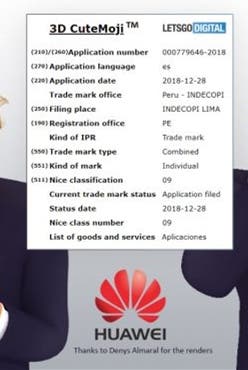 Speculations suggest that the Huawei P30 series may be released at the MWC 19 at the end of February. Huawei P30 will probably come with a triple rear camera setup while the P30 Pro will use a quad rear camera system which will support up 10x hybrid zoom. In August of last year, Huawei’s CEO, Yu Chengdong confirmed Huawei P30’s name to the media. Thus there is no dispute regarding its nomenclature. The Huawei P20 Pro still holds the top spot on DxOmark list and it appears that the list will have to wait until the arrival of Huawei P30 series for a change to occur at the upper cadre.