Chinese manufacturing giant, Huawei, made a serious blunder when its official new year message on Twitter was sent with an iPhone. At 11:31 on the evening of December 31, Huawei sent a New Year greeting on Twitter to its numerous customers on behalf of all Huawei’s employees. However, under the tweet, we can clearly see the inscription “Via Twitter for iPhone”. This means that whoever was operating Huawei’s official Twitter account, did so with an iPhone. After Huawei sent this tweet, it was deleted immediately but not before Marques Brownlee took a  screenshot. 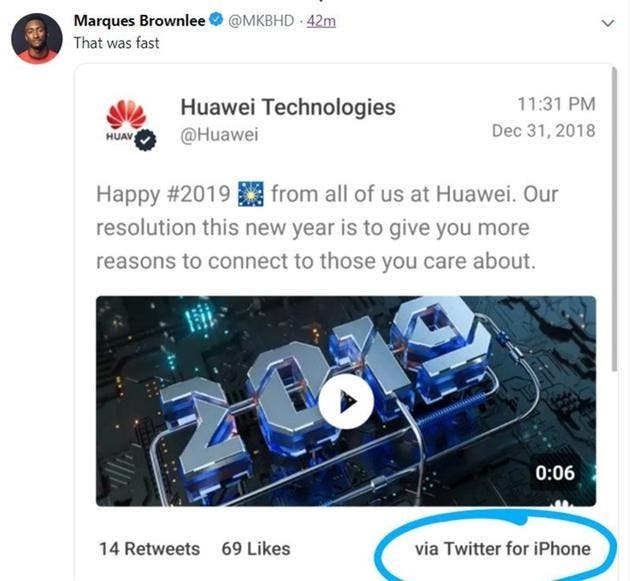 This incident was carried by both Chinese and international news platforms and it caused Huawei a worldwide embarrassment. The company responded swiftly and the punishment for those responsible has been meted out. 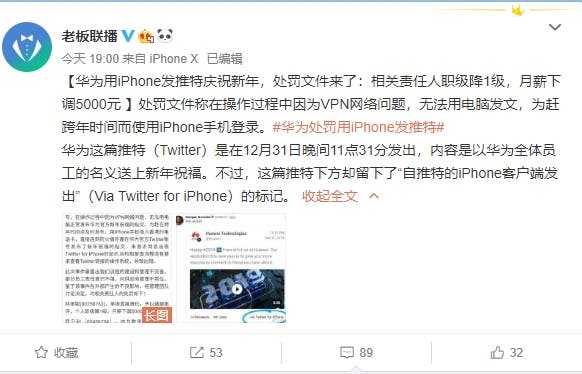 The staff directly responsible for the tweet has been notified and queried. His rank has been reduced by a level and his monthly salary has also been reduced by a whopping 5000 Yuan ($728). In addition, the director of digital marketing was also notified and queried. He has also been downgraded by one rank and his salary was also reduced by 5000 Yuan ($728). In addition, their annual assessment will not be higher than grade B and there shall be no salary increase or promotion for the next 12 months starting from January 2, 2019. Do you think Huawei was harsh on these staff?.