Leaks and rumors about Sony’s upcoming Xperia XZ4 keep mounting. Only a few hours after it trashed other phones on the AnTuTu benchmark, the Sony Xperia XZ4 has now passed through the Geekbench database.

Bearing the I8134 model number, the supposed Xperia XZ4 Benchmark listing confirms the presence of an 8-core processor with a frequency of 1.78 GHz, which is believed to be the Snapdragon 855 chipset, while also confirming that the device will boot Android Pie out of the box. The benchmark listing suggests it will come with  8GB of RAM, while there isn’t a clue on its storage. 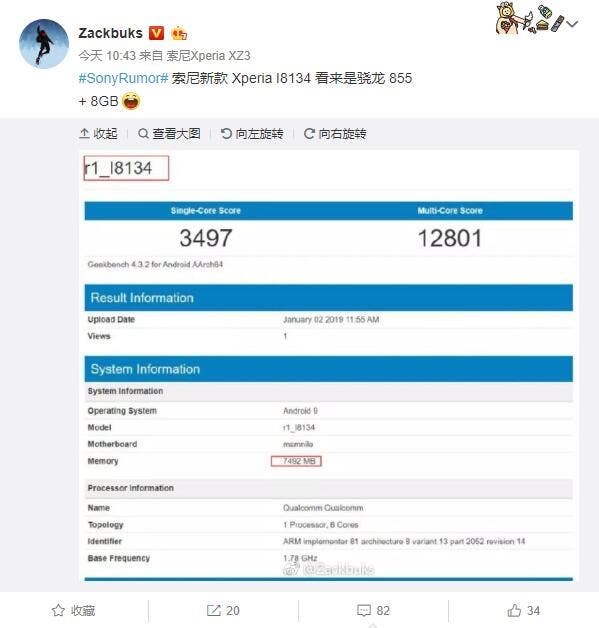 The alleged Xperia XZ4 has yet to visit the FCC and TENAA, but we’ve seen several of  its leaked CAD render, leaked screen protector as well as case renders, some of which indicates that the device could come with a rear fingerprint sensor, a triple rear camera setup, while it could come with an unusual screen to body ratio. On the display front, it appears the device will land with some extremely thin bezel, without a notch, and cut out for the earpiece, including proximity sensor. There’s a tiny hole in the left end of the screen, presumably for the LED notification light.

As for release date, SONY has a launch event for January 7th in Las Vega, however, chances are that Sony will keep the device for MWC 2019 launch.