Recently, Huawei’s sub-brand, Honor, announced that it will release the Honor 8A on January 8th. More details about this smartphone hit the rumor mill today. In the rendering released by Droid Shout, the Honor 8A uses a 6.09-inch waterdrop display with a screen resolution of 1560 × 720 and an aspect ratio of 19.5:9. 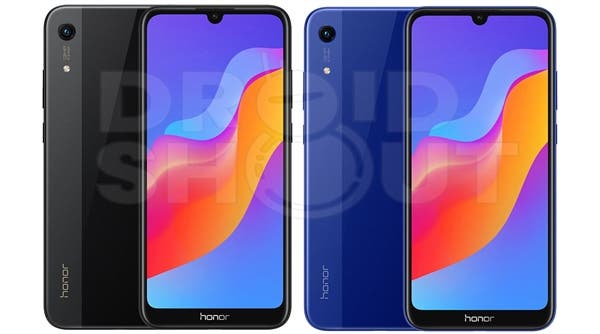 The rear of this smartphone is identical to the Honor 8X but this device is equipped with a single rear camera. The build material is not clear yet but speculations suggest that it may be plastic. According to the information released by TENAA, the Honor 8A comes with a dimension of 156.28 x 73.5 × 8.0 mm and weighs 150g. In the camera department, we have a single rear 13MP shooter which is supported by another 8MP camera upfront.

As for the processor, the Honor 8A is equipped with the MediaTek Helio P35 chip (same as the Xiaomi Mi Play) clocking 2.3GHz and the GPU is IMG GE8320 clocking 680MHz. This is far from the earlier speculated Kirin 710 SoC. The SoC is supported with 3GB of RAM and 64GB of internal storage. It will run on the latest Android 9 Pie out of the box and its lights are kept on by a 3020 mAh battery. The Honor 8A may be equipped with dual speakers and looking at its specs, it is certainly an entry-level smartphone which is expected to sell for about 1000 Yuan ($146).

Next Honor's VP: Competition between Huawei & Xiaomi is over