Xiaomi kicked off 2019 with some big news revealing it would be splitting its famous Redmi series as a separate brand. The Redmi brand will probably act as Honor currently does for Huawei. The first launch of Redmi is already scheduled for January 10 and Lei Jun has revealed what could be the potential pricing of the upcoming flagship. Now, the exact name of the device is not known but speculation is that it could be called Redmi 2 Pro or Redmi 7. 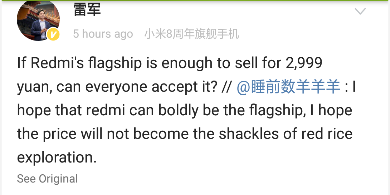 The Xiaomi founder took to China’s micro-blogging platform to ask fans whether 2,999 Yuan ($440) would be acceptable as the price of the upcoming Redmi flagship. Do note that the handset will compete directly with the Honor V20 which is also priced exactly the same. Knowing how Xiaomi always has the upper hand in pricing, we could say that the Redmi flagship could be priced below 2,999 Yuan to make it more appealing than the Honor V20 and Xiaomi is quite capable of doing it. However, we won’t jump to conclusions just yet.

As far as other specs are concerned, the Redmi Pro 2 or Redmi 7 looks pretty strong on paper and attractive on the physical side. Based on leaks, the handset is expected to rock a 6.3-inch screen with a battery capacity of 3900mAh. Also, the show-stealer will be the 48MP camera on the back and the handset could be the very first with the Snapdragon 675 SoC. And it will also feature a 3.5mm headphone jack. Lei Jun had also hinted the possibility of 18W fast charge in a previous Weibo post but that is not confirmed. What is confirmed is USB Type-C. The launch is on January 10 which is just five days far.