2019 has only just begun, and it appears it is going to be another year of  Copy it. While the previous year was majorly all about copying Apple’s iPhone X design, the year 2019 could shape out to be about copying Samsung’s Infinity-O design and Huawei’s design language.

Another feature that could become commonplace is the latest smartphone camera sensor developed by imaging giant Sony – the IMX586. That sensor has a whopping 48 million pixels behind it, and while the sensor already found its way into the Nova 3, and Honor V20, Xiaomi has already hinted it is working on a smartphone with a similar feature, and now comes the news that Meizu might be the next buyer of the Sony SENSOR.

While it has only been a couple of weeks since the Meizu Note 8 hit the retail shelves, words from Meizu suggest it could already be working on a successor – the Meizu Note 9. The revelation comes from no other person than Meizu CEO Jack Wong.

Going by words from CEO Jack Wong, the Meizu Note 9 could be the company’s take on the Nova 4, the Honor V20 and the rumored Xiaomi phone set to be unveiled on January 10th. As per Meizu CEO Jack Wong post on the company forum, the Meizu Note 9 is tipped to house an unannounced SoC from Qualcomm – the upcoming  Qualcomm Snapdragon 6150 chipset expected to be manufactured on an 11nm process. 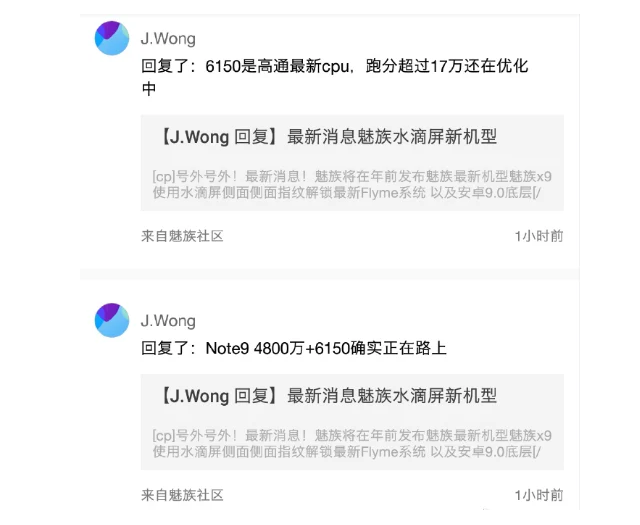 He further confirmed that the device will come fitted with a whopping 48Mp camera, though we are not sure if it could be the same sensor used by Honor and Huawei.

Other details are scarce at the moment, however, we expect the company to adopt a newer design element – probably the water drop design, the Infinity-O like design coupled with multiple rear camera setup.