Last week, it was reported that Apple had publicly admitted in the fourth quarter of 2018 the iPhone sales in China are obviously unsatisfactory. But according to a recent report from Canalys, Apple’s market performance in the last quarter was quite good, at least in terms of revenue.

As the report shows, the smartphone sales in the Chinese market in the third quarter of 2018 were $30.7 billion. This figure is mainly formed by five brands, of which Apple and Huawei accounted for the largest blocks of 23% and 22%, respectively. 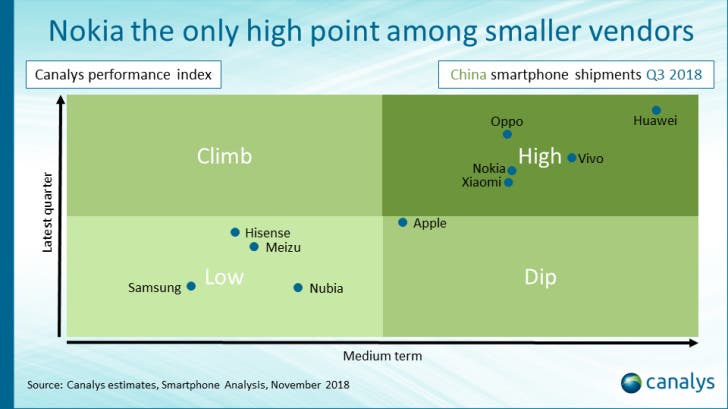 As for the Cupertino-based company, this positive performance is attributed to the release of the iPhone XS and XS Max in September last year, as well as the continued sales of the iPhone X and iPhone 8. At the same time, Huawei’s revenue growth is mainly due to the popularity of the P20 and the P20 Pro smartphones, as well as the strong performance of Honor devices.

In terms of shipments, Huawei leads with a 25% market share. However, Apple’s performance is not good. In fact, lower-than-expected sales of the iPhone XS and XS Max and a slowdown in iPhone X sales have made the brand fall to fifth place. Vivo, OPPO, and Xiaomi ranked second, third and fourth, respectively. 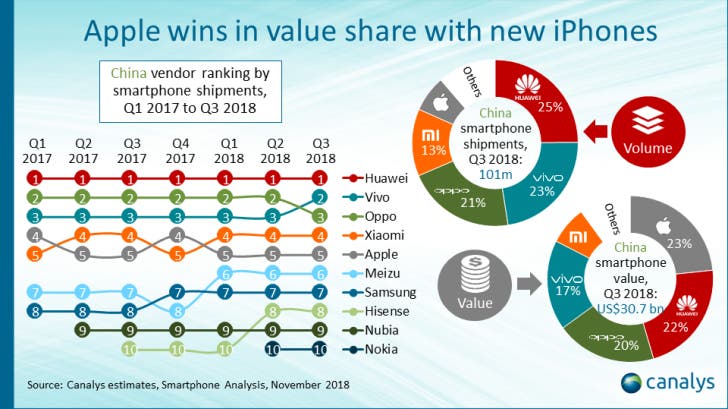 Samsung and Nokia are ranked 7th and 10th, respectively. Canalys did not provide revenue data for these two companies. But it is worth noting that, apart from Apple, they are the only overseas brands that have significant influence in China.

The rest of the manufacturers entered the top ten are Meizu, Hisense, and Nubia. Actually, the former two have launched a few noteworthy models. But we can’t say the same about Nubia. So its appearing in the list is a bit confusing.

Previous Flash sales on Gearbest have the ALLDOCUBE M5X only for $169.99