According to a recent filing by SEC, Apple’s CEO, Tim Cook made over $15 million in 2018. Of this amount, $12 million in incentives for achieving sales and operating income performance goals while $3 million is his basic salary. Cook will also receive 294,082 as private jet fare. All these excludes the $121 million that Apple’s CEO vested this year from stock while he still has over about $189 million (1.5 million Apple shares) worth of stock that hasn’t vested. 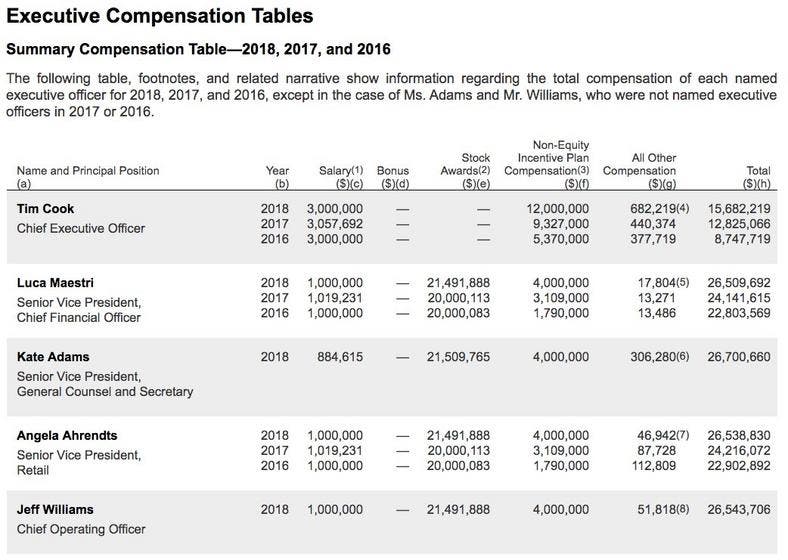 Apples average worker earns $55,426 which implies that Cook’s compensation, excluding his restricted stock, is 283 times what an average Apple employee makes. This is exactly why we say “its good to be Apple’s CEO”. Apart from Cook, other top executives of the company also went home with huge paychecks. CFO Luca Maestri, general counsel Kate Adams, retail head Angela Ahrendts, and COO Jeff Williams all made over $26 million each, according to the SEC filing. Apple states in the filing

“We believe the compensation paid to our named executive officers for 2018 appropriately reflects and rewards their contribution to our performance,”

According to an SEC filing, Tim Cook donated about $5 million in Apple stock to an unspecified charity. Back in 2015, he said that if all goes according to his plan, his entire fortune is going to charity.

Next Hisense U30 debut at CES: comes with a punch hole camera and SD675