The Xperia XZ4 Compact has been canceled, but the company still has a main contender of the XZ4 series to release. The new device might be the company’s all-or-nothing for the mobile segment and is expected to come on late February during MWC 2019. Today Sony confirmed that will be holding a press conference on February 25, and we expect to see the handset announcement during the event. 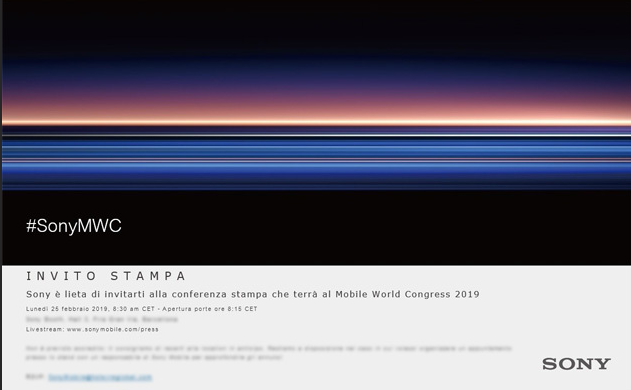 The company has initially sent invites for the Russian and Italian media outlets, but we expect to see the Japanese company sending the next batch of invites for more countries soon. Unfortunately, the image of the invite doesn’t reveal much about the event.

According to rumors, Sony’s MWC 2019 biggest announcement will be the Xperia XZ4. The company’s new flagship will debut with a massive 6.5-inch notchless display with 21:9 aspect ratio, while 18:9 and 19:9 displays are everywhere nowadays, the 21:9 proportion will be a first in the smartphone segment. The XZ4 will also mark Sony’s new focus on the camera department since the company is employing a triple-camera setup on the glass rear, unfortunately, the details about this setup are yet to be provided. The handset will adopt a side-mounted fingerprint scanner, instead of any kind of fancy “invisible” authentication methods. Under the hood, the smartphone will be equipped with a Snapdragon 855 along with 256GB of Storage, up to 8GB of RAM. The lights will be kept by a 3,900mAh battery and the smartphone will run Android 9 Pie straight out the box.

Sony’s new flagship will be company bet to get back on track in the mobile segment, the handset will be a good alternative for those who don’t need full-screen displays with any kind of fancy mechanism, or that simply can’t deal with screen cutouts. The handset should be accompanied by Xperia L3, Xperia XA3, and Xperia XA3 Ultra, which will act like Sony’s new entry and mid-range offerings.

Next Samsung Galaxy A90 may feature 128GB of internal storage, to come in three gradient finishes