Today, Chinese manufacturer, Xiaomi, officially announced that it became the first brand on Jingdong platform to surpass 20 million items. It is also the brand with the most fans in Jingdong. While Xiaomi does pretty well in foreign markets, it is still well behind the likes of Samsung, Huawei, and Apple in China. At present, Xiaomi’s official flagship store is collaborating with Jingdong for the Xiaomi New Year Festival promotion (January 11-25), and they are offering 200 yuan ($30) coupons (applicable to some products). 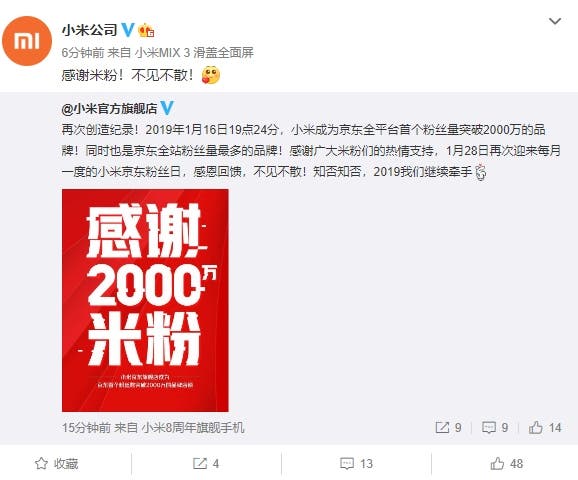 As for the new product, JD currently has the recently released Redmi Note 7 which has a 999 Yuan ($148) starting price. The Xiaomi Mi 8 with 960fps slow-motion videos and handheld super night scene mode is available for 2099 yuan ($310). The new Xiaomi Mijia photo printer is also available for 499 yuan ($74).