Today, the Lenovo Z5 Pro GT Snapdragon 855 version appeared on GeekBench. The listing shows that the new smartphone is equipped with 12GB of RAM which makes it the world’s first 12GB LPDDR4X RAM flagship. It got a single core score of 3306 and a multi-core score of 9603. Compared to other Snapdragon 855 listings, this score is a bit low. 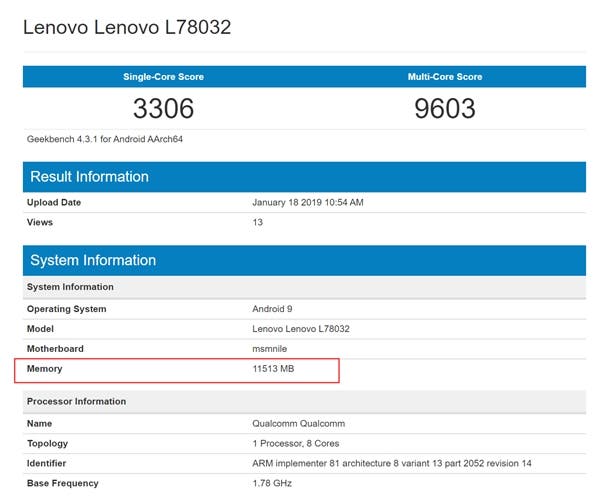 The Snapdragon 855 SoC is Qualcomm’s high-end product which was released late last year but will be used commercially this year. It is based on the 7nm process technology, using a new three-cluster eight-core architecture and the CPU frequency reaches 2.84GHz. It comes with an Adreno 640 GPU.

The Lenovo Z5 Pro GT Snapdragon 855 version uses a 6.39-inch Samsung AMOLED display (screen ratio is 95.06%). In the camera department, it comes with a 24MP+16MP dual rear AI camera while upfront, it has another 16MP shooter. Its lights are kept on by a 3350 mAh battery. This smartphone is equipped with the fifth generation photoelectric on-screen fingerprint sensor. According to the company, the accuracy of fingerprint recognition is greatly improved and the owner’s information is swiftly transmitted. The touch, vibration and unlock takes place at almost the same instant.