We already knew the Vivo APEX 2019 was coming on January 24th but now it’s more official than ever as invitation letters have been sent out to the press. In the invite we can read there will be a new product launch conference in Beijing on January 24th (next Thursday), which is when they’ll officially reveal the first Vivo flagship of 2019.

The invitation letter shows that the theme of this conference is “To a Simple Future”, which implies the design of the Vivo APEX 2019 will be minimal yet futuristic.

At present, we don’t have any official details about the Vivo APEX 2019, aside from a few teasers which give the phone with a very rounded design and “water ripples”. 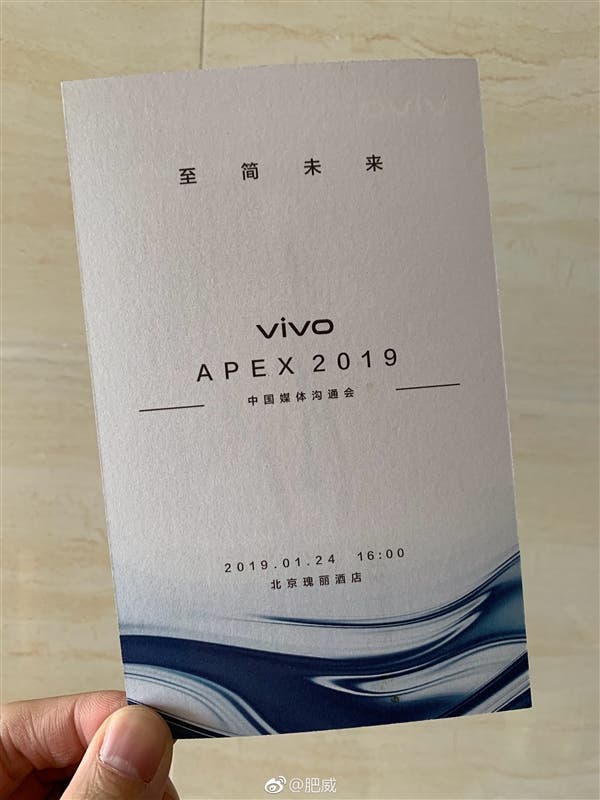 Inside this interestingly shaped body we’ll find a Qualcomm Snapdragon 855 CPU based on a 7nm manufacturing process clocked at up to 2.84GHz, an Adreno 640 GPU, at least 8GB of RAM and 128GB of storage.

In addition, the Vivo APEX 2019 is also expected to be equipped with a half-screen fingerprint unlocking technology. The advantage of this technology is that users won’t need to find a fixed point on the screen, instead the fingerprint can be recognized on all the bottom half of the display.

Finally, what about mass production? The APEX launched in 2018 was an incredible concept phone for the time and it was then released in a very similarly looking device – the Vivo NEX with its lifting front camera. That said, the APEX 2019 is expected to be a full fledged flagship phone which will actually be mass produced and sold.