Forget the VIVO Apex 2019 concept phone, smartphone maker Meizu could be cooking something more enthralling. The Chinese phone maker a while after revealing that it is working on 3 different SD 855 powered smartphones has taken to Weibo again to tease the launch of a new device that could sweep you off your feet when it arrives later today.

Meizus post on Weibo reads, “The world’s first ______, it’s time to show real technology, black technology, see you tomorrow!” The image attached with Weibo post reads “World’s first” followed by a black bar. Hidden behind the image is the word “holeless phone”, while the teaser also referenced the hashtag #Meizu 16 Flagship mobile phone, so it is pretty obvious we are dealing with a Meizu 16th flagship phone, and not the rumored Meizu M9 Note that is tipped to launch soon with a water drop notch. 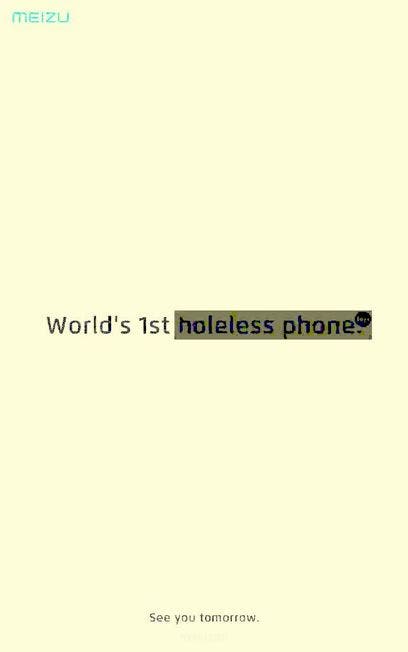 What the heck then is the Holeless phone? well, our guess is that Meizu could be launching a phone with virtually no hole that qualifies as opening including a charging port or a 3.5mm headphone jack, instead, the handset may only support wireless charging and bone conduction sound technology.

And unlike the VIVO APEX 2019, the Holeless phone obviously will button, but whether or not the earpiece, loudspeaker grille counts as “holes” remains to be seen. All that and more will be clear to us all when the so-called Holeless phone launches later today, so keep an eye on Gizchina for more timely update.